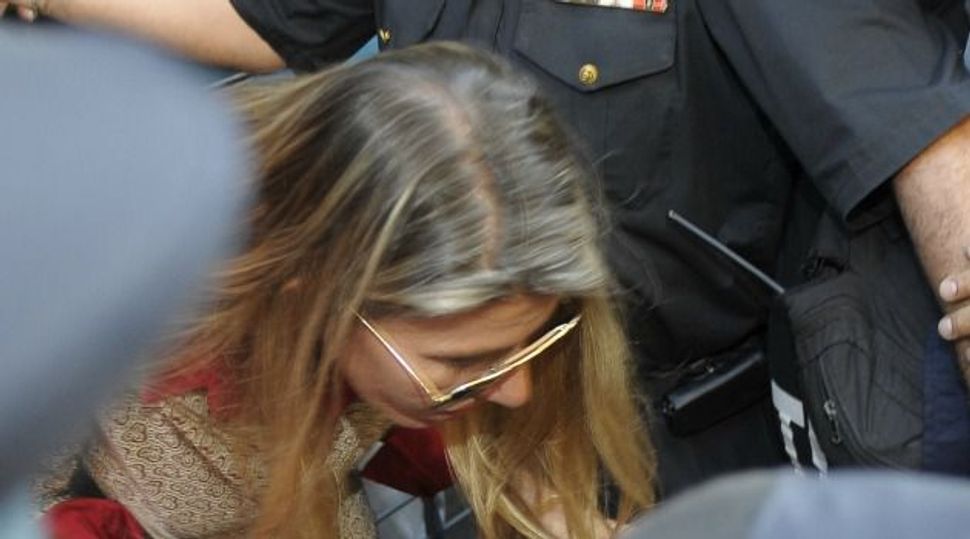 Sandra Arroyo, the ex-wife of slain Argentina prosecutor Alberto Nisman, wades through crowds after his death. Image by getty images

(Reuters) — The investigation into the death of an Argentine prosecutor who leveled criminal charges against the president has become too politicized and needs the involvement of a regional human rights commission, the dead man’s ex wife said on Thursday.

Minutes before the Senate passed a bill creating a new state security service to replace the tarnished intelligence secretariat (SI) at the heart of the scandal, Sandra Arroyo called for calm as investigators probe the death of Alberto Nisman.

“Don’t continue politicizing a case in which so much is still unresolved,” she told a group of opposition senators.

“In my own name and that of my daughters, I ask the national public defenders’ office to consider … the possibility of taking the case to the Inter-American Commission on Human Rights,” a grim-faced Arroyo said.

The seven-member commission, an arm of the Washington-based Organization of American States, handles rights cases in the Western Hemisphere.

Nisman’s body was found in his bathroom on Jan. 18, a bullet in his head, a pistol by his side. He had been scheduled to take his case to Congress the next day accusing President Cristina Fernandez of trying to derail the criminal probe into a deadly 1994 bombing in Buenos Aires that killed 85 people.

Nisman’s death has spawned conspiracy theories involving Fernandez, rival factions vying for control of the country’s intelligence apparatus and a group of Iranians accused by the courts of bombing the AMIA Jewish community center 21 years ago.

Fernandez has said state intelligence agents who were fired in December planted the accusation that she conspired with Iran to clear the suspects in the AMIA bombing in order start trading Argentina grains for much-needed Iranian oil.

The Senate passed the measure creating a new state security agency by a 38-7 vote. Fernandez says the SI has changed little since Argentina’s 1976-83 military dictatorship, and needs to become more accountable.

Opposition Senator Ernesto Sanz had called the proposal, which now goes to the lower house of Congress for debate, a “facade intended to ensure nothing really changes.”