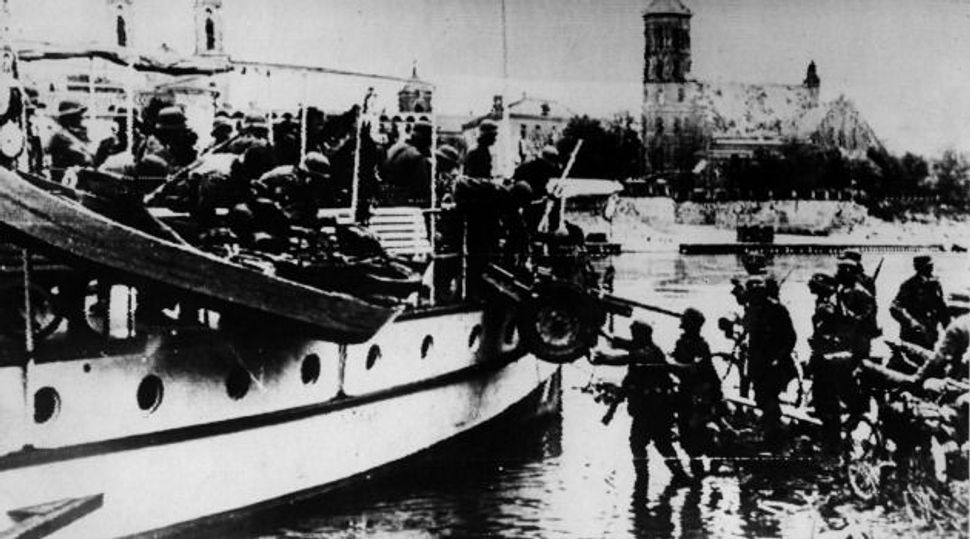 Approximately 500 ultra nationalists, some bearing Nazi swastikas, marched through a Lithuanian city that during the Holocaust saw the region’s most effective massacre of Jews.

Monday’s march through Kaunas, Lithuania’s second-largest city 60 miles from the capital of Vilnius, was the eighth annual event organized by the Lithuanian Nationalist Youth Union on Feb. 16 – one of their Baltic state’s two independence days.

As the marchers assembled at a local park, they were confronted by 20-odd protesters from the local Jewish community and anti-fascist groups who shadowed the marchers in a silent counter-demonstration.

“This march is particularly offensive because it is taking place where locals and Nazis murdered more than 10,000 Jews in one day,” said Dovid Katz, a U.S.-born Jewish scholar of Yiddish who settled in Vilnius 16 years ago and has led protests against the veneration of Nazis in the Baltic States.

Katz, editor of the website DefendingHistory.com, was referring to the Kaunas massacre in October 1941, in which more Jews were killed in a single day than any other killing spree against Jews in the Baltic region.

During the march, locals chanted “out with Katz” and made obscene gestures at him and at Efraim Zuroff, a hunter of Nazis and the Israel director of the Simon Wiesenthal Center.

Three activists from the nationalist youth movement posed for pictures next to Zuroff while holding signs that accused Israel of being a racist state and showed a picture of Africans refugees on the march.

Tomas Skorupsis, an organizer of the march from the youth movement, said the event was not anti-Semitic. Repeating a popular view in far-right circles in the Baltic nations, he added: “There are many Lithuanians who find it hard to forgive Jews who, during Communism, killed nationalist freedom fighters. But I think we should leave it in the past and look ahead.”

Many in the Baltic nations – where Jewish communities hundreds of thousands strong were wiped out by the Nazis and their local helpers – regard local fascists as heroes because they fought Communist occupation, which is often equated with the Nazi one.

“This comparison is not only false, it also serves to whitewash the stain in these countries’ histories instead of confronting it, as other European nations have done,” Zuroff said.