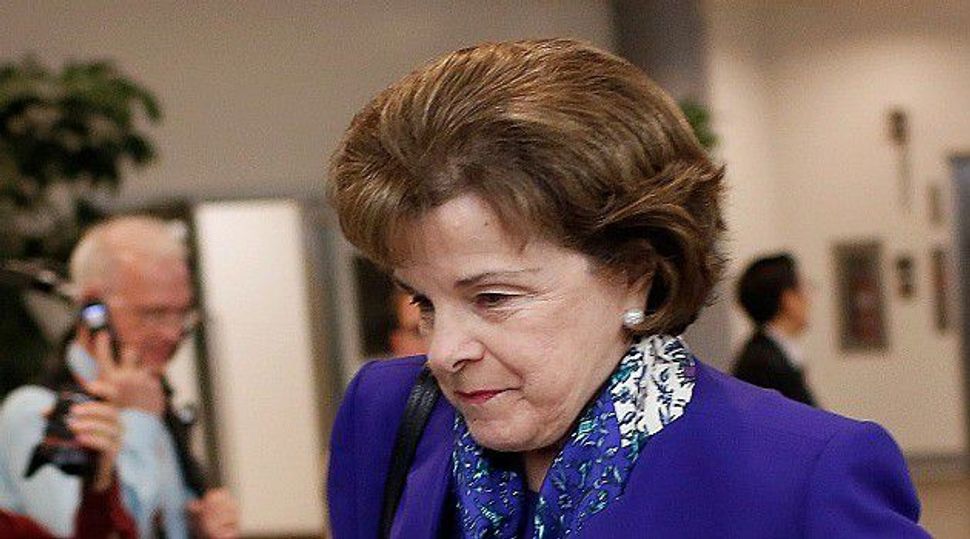 Sen. Dianne Feinstein and Richard Durbin invited Benjamin Netanyahu to a closed-door meeting with Democrats during his upcoming visit to Washington. Image by getty images

Senators Richard Durbin and Dianne Feinstein extended the invitation “to maintain Israel’s dialog with both political parties in Congress,” according to a letter to the Israeli leader seen by Reuters.

Netanyahu has faced criticism at home and abroad for his plans to address Congress on Iran’s nuclear program on March 3, just two weeks before Israeli elections and at a sensitive point in international negotiations with Tehran.

The Israeli leader accepted the invitation from Republican leaders in the U.S. Congress, who broke diplomatic protocol by consulting neither Democrats in Congress nor Democratic President Barack Obama’s administration.

“This unprecedented move threatens to undermine the important bipartisan approach towards Israel – which as long-standing supporters of Israel troubles us deeply,” Durbin and Feinstein wrote.

“It sacrifices deep and well-established cooperation on Israel for short-term partisan points – something that should never be done with Israeli security and which we fear could have lasting repercussions,” they said.

Critics have accused Netanyahu of placing his ties to Republicans above Israel’s relations with the United States, its most important ally. U.S.-born Ron Dermer, Israeli’s ambassador to Washington, is a former Republican political operative.

Although some Democrats have said they would not attend Netanyahu’s speech to the joint meeting of the House of Representatives and Senate, the session proposed by Durbin and Feinstein would be in addition to the address. It is not intended as an alternative, a Durbin aide said.

The two senators have not indicated publicly whether they planned to be at the Israeli leader’s address, their spokesmen said.

Obama has declined to meet Netanyahu during his trip to Washington, citing what he has said is U.S. protocol not to meet world leaders shortly before national elections. Israelis are due to vote on March 17.

Durbin is the No. 2 Democrat in the U.S. Senate. Feinstein, who has been in the Senate since 1992, is the top Democrat on the Senate Intelligence Committee and a senior member of the Appropriations and Judiciary committees.

The letter was sent on Monday evening. The Israeli Embassy did not have an immediate response to the invitation.