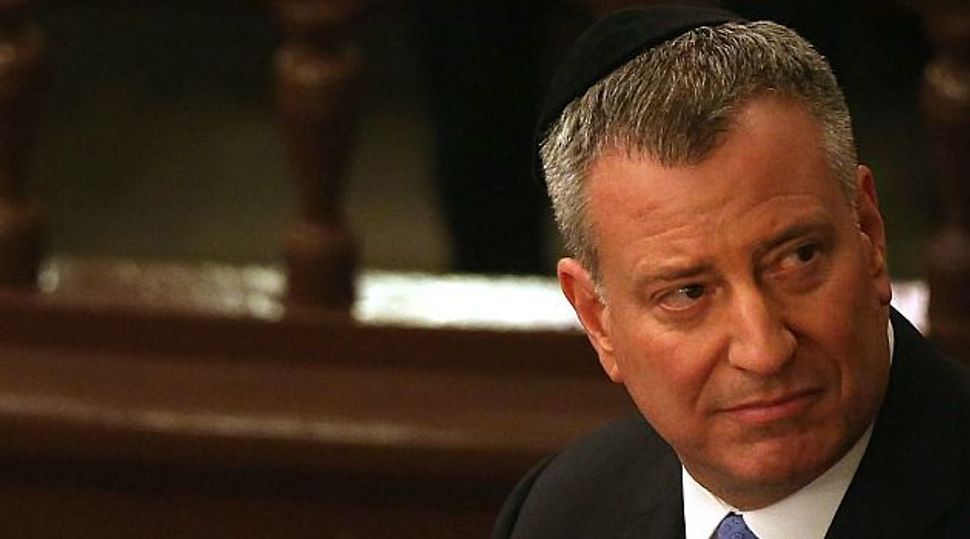 In videos and photos posted on the blog, de Blasio can be seen shaking the hand of Rabbi David Twersky, the rebbe of the Skver Hasidic sect. In a one-second video, the mayor can be glimpsed bending to kiss the rebbe’s hand.

The mayor’s press office did not respond to a question about the visit. The mayor’s trip to New Square was not mentioned on his public schedule, which is circulated to the press daily.

Twersky rules the Rockland County village of New Square with an iron hand. A Forward expose by Frimet Goldberger published in December found that Twersky, who is seen as nearly godlike by his followers, failed to act on allegations of sexual abuse in his community. A New Square resident who bucked an edict to pray only in Twersky’s synagogue was the victim of an arson attack perpetrated by a young man who lived in Twersky’s house.

It’s unclear why de Blasio would have attended the wedding. The Skver sect is a powerful voting bloc in state and national politics, but it has relatively few followers in New York City. Still, Twersky has drawn a steady stream of high-profile politicians to his enclave.

De Blasio himself has a long history in New Square. In 2000, when the mayor was working as Hillary Clinton’s campaign manager in her race for U.S. Senate, Clinton visited New Square on a campaign stop. When she received nearly all of the village’s 1,400 votes in the Senate election, questions were raised about whether Bill Clinton’s 11th-hour grant of clemency to four Skver members had been part of a quid pro quo deal.