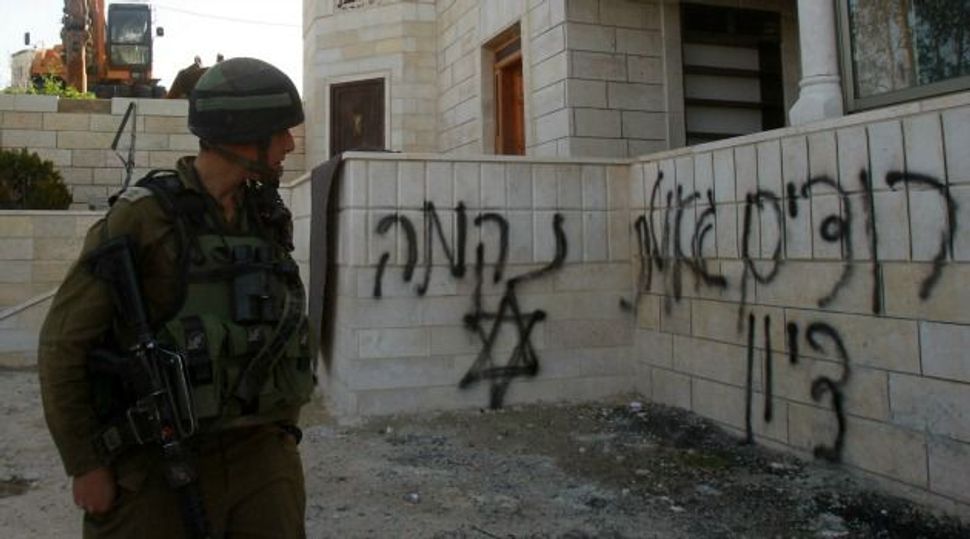 Israeli soldier walks past a mosque that was attacked by suspected Jewish extremists on the occupied West Bank. Image by getty images

A mosque in the West Bank near Bethlehem was set on fire and nationalist slogans were painted on its walls.

The attack in the Jaba village occurred early Wednesday morning. A window of the mosque was broken and something burning was thrown inside. Worshippers who arrived at the mosque at 4:30 a.m. saw the flames and put out the fire, the Palestinian Maan news agency reported. The mosques interior walls and furniture were damaged in the attack.

Phrases spray painted on the mosque’s outside walls included “we want the redemption of Zion” and “revenge.”

Residents of the village, located close to the Gush Etzion bloc of Jewish settlements, blamed the arson attack on Jewish nationalists.

The attack occurred on the 21st anniversary on the Gregorian calendar of the massacre of 29 Palestinian worshippers at the Cave of the Patriarchs in Hebron by Jewish settler Baruch Goldstein.