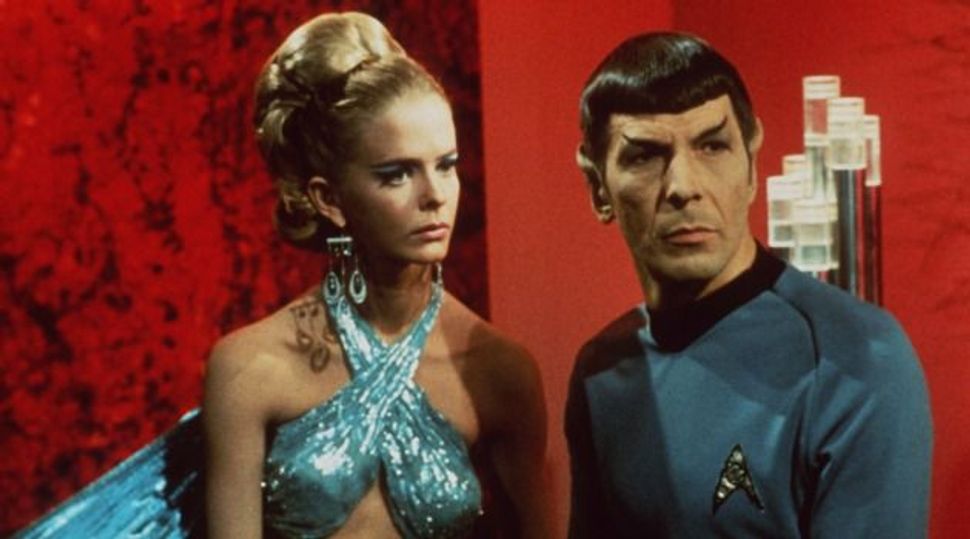 (Reuters) — Leonard Nimoy, who won fame and fans with his portrayal of logic-bound, half-alien Mr. Spock in the “Star Trek” TV series and movies, died on Friday. He was 83.

Nimoy, who had battled chronic obstructive pulmonary disease (COPD), died in the morning at his home in Los Angeles’ Bel Air section, his agent, Bob Gersh, said in a statement.

“You taught us to ‘Live Long and Prosper,’ and you indeed did, friend,” said Takei, referring to a trademark phrase uttered by Nimoy’s character.

Nimoy grew up in the West End of Boston, where he was born to Yiddish-speaking immigrants parents from Ukraine in 1931.

Nimoy had long struggled with a love-hate relationship with the role of Mr. Spock – the half-human, half-Vulcan first officer on the starship Enterprise – but came to accept its part in his life.

Last year, he disclosed on Twitter that he had been diagnosed with COPD, a progressive lung disease.

Nimoy had other roles during a lengthy career in TV, film and theater. He directed successful movies, wrote books, composed poetry, published photographs and recorded music. But he will be forever linked to Spock in the original 1960s “Star Trek” TV series and subsequent movies.

Known for suppressing his emotions and using strict logic to guide his actions, the pointy-eared, green-blooded Spock became one of science fiction’s best-known, most beloved characters.

For years, Nimoy resented that Spock defined him but ultimately came to accept that his life would be intertwined with the alien, who inspired a fervent fan following.

His feelings were summed up in the titles of his memoirs: “I Am Not Spock” in 1975 and “I Am Spock” two decades later.

“I was involved in something of a crusade to develop a reputation as an actor with some range,” Nimoy wrote in “I Am Not Spock.”

“I went through a definite identity crisis. The question was whether to embrace Mr. Spock or to fight the onslaught of public interest. I realize now that I really had no choice in the matter. Spock and ‘Star Trek’ were very much alive and there wasn’t anything that I could do to change that.”

Still, he wrote that if given the choice of being any other television character, he would choose Spock.

Nimoy had often confronted “Star Trek” creators during the original series over their conception of Spock, and his input was responsible for many aspects of the character.

He came up with the “Vulcan nerve grip” that rendered foes unconscious, as well as the split-fingered Vulcan “live long and prosper” salute, which he said was inspired by a gesture he had seen worshippers make in his synagogue when he was a boy.

Nimoy signed off his tweets with “LLAP,” an abbreviation of “live long and prosper.”

Shatner and Nimoy sometimes had a professional rivalry but maintained a long friendship.

“I loved him like a brother. We will all miss his humor, his talent, and his capacity to love,” Shatner said in a statement.

“Leonard’s integrity and passion as an actor and devotion to his craft helped transport ‘Star Trek’ into television history,” she said in a statement.

The original TV series was canceled in 1969 by NBC after three seasons. But it found success during syndicated reruns in the 1970s and inspired fan conventions with hordes of devotees. It jumped to the big screen by the end of the decade.

Nimoy was not thrilled about taking part in the big-budget first film, “Star Trek: The Motion Picture” in 1979.

But it was a financial success, leading to many sequels. Nimoy agreed to appear in “Star Trek II: The Wrath of Khan” in 1982 only after the producers promised him a great death scene and other sweeteners.

Even though Spock “dies” at the movie’s end, Nimoy returned to play the character in the next four “Star Trek” films, directing the third and fourth ones.

After those efforts, he branched out and directed the comedy “3 Men and a Baby,” the top money-making movie of 1987.

Spock, whose father was from the planet Vulcan and mother from Earth, served as first officer and science officer under Kirk.

In the successful 2009 “Star Trek” movie reboot of the franchise, Zachary Quinto took over the role of Spock but Nimoy appeared as an older version of the character.

His everlasting renown as Spock led to quirky guest appearances on popular TV shows in recent decades, including the cartoons “The Simpsons” and “Futurama” (in which he provided the voice for his own disembodied head) and on the “The Big Bang Theory,” in which he was the voice of an opinionated Spock doll.

Nimoy was married twice and had two children. He is survived by his wife, Susan, children and grandchildren.