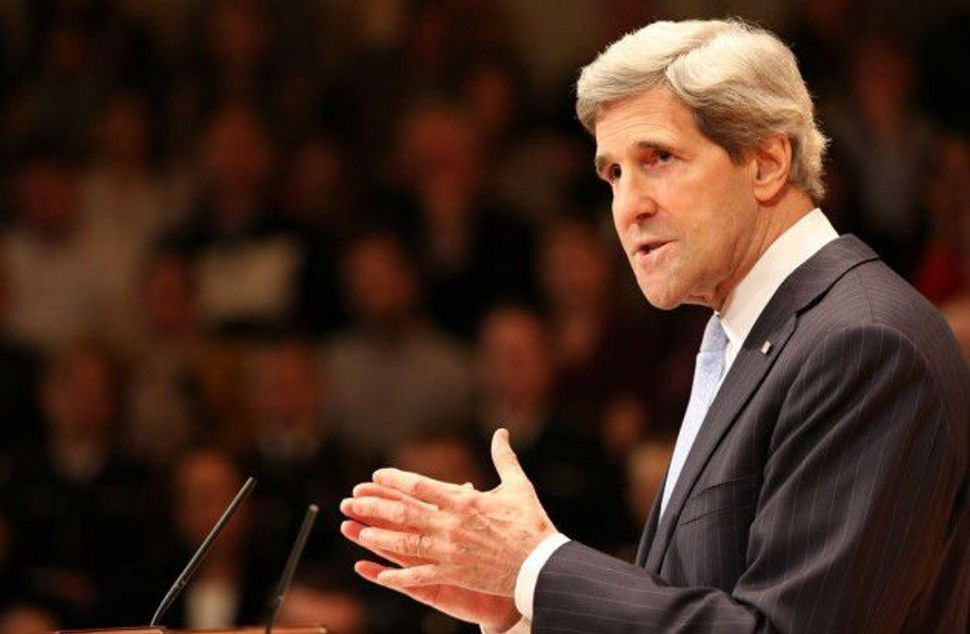 Secretary of State John Kerry accused the U.N. Human Rights Council on Monday of focusing disproportionately on allegations of abuses by Israel.

In a speech to the Council in Geneva, Kerry spoke of its “deeply concerning record on Israel,” which he said risked undermining the effectiveness of the entire organization.

“No one in this room can deny that there is an unbalanced focus on one democratic country,” he said.

Kerry landed in Geneva late on Sunday for up to three days of talks with Iran’s Foreign Minister Mohammad Javad Zarif on a deal to restrain the Iranian nuclear program in exchange for easing sanctions on Tehran. The talks will be held in Montreux.

In addition, Kerry will meet Russian Foreign Minister Sergey Lavrov on Monday to discuss Iran, Syria and Ukraine and speak at the U.N. Human Rights Council in part to defend Israel against what U.S. officials regard as its bias against the Jewish state.

“Our position is always very much in defense of Israel and protection of Israel’s interests at the Human Rights Council,” a U.S. official aboard Kerry’s plane told reporters, saying any investigations of Israel should be “objective and neutral and not … one-sided and biased.”

The official said that one of Washington’s main concerns was a U.N. inquiry into last summer’s conflict in Gaza in which more than more than 2,100 Palestinians, most of them civilians, 67 Israeli soldiers and six civilians in Israel were killed.

The U.N. investigation, due to issue its report by March 23, is looking in to violations by both sides. The U.S. official said the United States wanted “to try to protect against any follow-on” steps or inquiries after the report is released.

In traveling this week to Switzerland, Saudi Arabia and Britain, Kerry will avoid being in Washington when Netanyahu is expected to deliver a scathing criticism of U.S. negotiations to curb Iran’s nuclear program.

The United States and many of its allies, including Israel, suspect that Iran is using its civilian nuclear program as a cover to develop atomic weapons. Iran denies this, saying the program is for peaceful uses such as generating electricity.

Netanyahu’s planned speech on Tuesday before a joint session of Congress has strained relations with the Democratic White House, which has made no secret of its anger that it was set up with congressional Republicans without it being in the loop.

Netanyahu has described the emerging agreement as a bad deal, even though U.S. officials stress that its details have yet to be nailed down. The White House has suggested that Netanyahu’s speech, two weeks ahead of an Israeli election, has injected partisanship into the U.S.-Israel relationship.