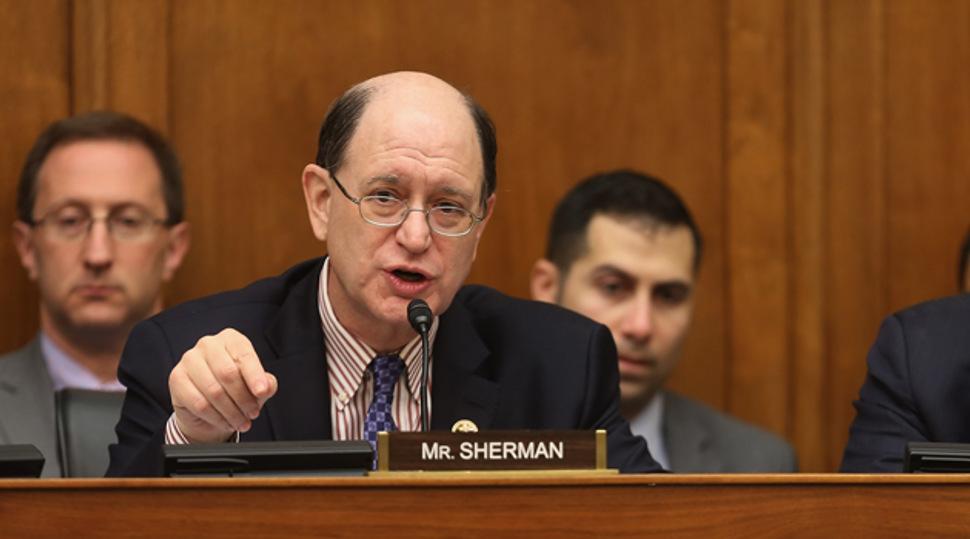 WASHINGTON (JTA) — Rep. Brad Sherman withdrew from a forum for skeptics of President Barack Obama’s Iran nuclear strategy, saying an ad for the event was “vulgar.”

“I cannot appear at a forum which was advertised using an unwarranted incendiary personal attack,” Sherman (D-Calif.) said Monday in a statement titled “Congressman Sherman Condemns Vulgar New York Times Ad” and released just an hour or so before the event at a Senate office building on Capitol Hill.

Rabbi Shmuley Boteach, the event organizer, in a full-page advertisement accused National Security Adviser Susan Rice of turning a blind eye to genocide and juxtaposed a photo of her face next to skulls.

“Susan Rice has a blind spot: Genocide,” the ad said.

Boteach criticized Rice for her own criticism of Israeli Prime Minister Benjamin Netanyahu’s speech before Congress on Tuesday, which was organized with the congressional Republican leadership and without the knowledge of the White House and congressional Democrats. Rice said the perception of partisanship was “destructive” of the U.S.-Israel relationship.

The ad referred to Rice’s opposition when she was a staffer for the Clinton administration National Security Council to using the word “genocide” when describing the mass killings in Rwanda at that time. She has since apologized for that position and has been a leading proponent within the Obama administration for an interventionist policy when it comes to human rights abuses.

An array of Jewish groups condemned the ad.

“Nothing has done as much to unify the Jewish community, and nothing has done so much to bring the Jewish community in agreement with the Obama administration, as this ad,” Sherman said. Elie Wiesel, the Holocaust memoirist, and Sen. Ted Cruz (R-Texas), a likely presidential candidate, also were scheduled to appear at the event and did not cancel.

Sherman has been one of the sharpest critics in his party of the Obama administration’s role in the nuclear talks between Iran and the major powers.

“I have the utmost respect and admiration for Professor Wiesel, and his advocacy in remembering the Holocaust and supporting the State of Israel have been instrumental,” Sherman said. “Senator Cruz and I both share concerns about a nuclear Iran. I am saddened that this advertisement has preempted what could have been a productive conversation.”