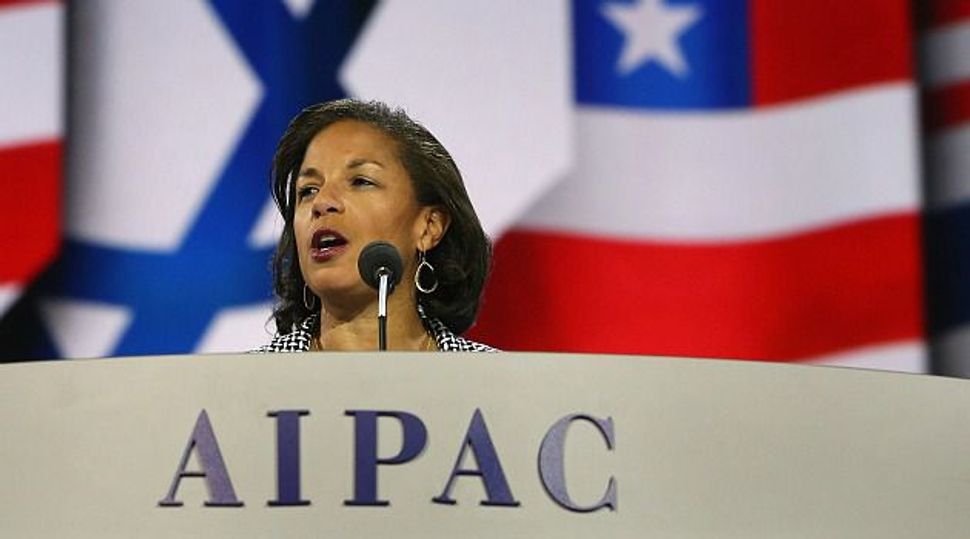 A nuclear deal with Iran must include access to its nuclear facilities even after the expiry of restrictions, which would last at least ten years, Susan Rice, the U.S. national security adviser, told AIPAC.

Rice, addressing the American Israel Public Affairs Committee on Monday, the second day of its annual conference, said expectations that Iran would cease uranium enrichment altogether or that restrictions would be in place indefinitely, were unrealistic.

But she added that intrusive inspections would continue indefinitely.

“At the end of any deal, Iran would still be required to offer comprehensive access to its nuclear facilities and to provide the international community the assurance that it was not pursuing nuclear weapons,” she said.

Insisting on no enrichment would collapse the alliance the Obama administration has built to sanction and isolate Iran, factors which led Iran to agree to nuclear negotiations, Rice said.

“Let’s remember that sanctions have never stopped Iran from advancing its program,” she said.

Without a deal, Rice said, Iran would return to enrichment levels it achieved before the terms governing nuclear talks with the major powers imposed restrictions, and seek to expand its nuclear capability.

“And, we’ll lose the unprecedented inspections and transparency we have today,” she said.

“I know that some question a deal of any duration,” she said. “But, it has always been clear that the pursuit of an agreement of indefinite duration would result in no agreement at all.”

Restrictions would be in place at least for ten years, she said.

“A deal that extends for a decade or more would accomplish this goal better than any other course of action – longer, by far, than military strikes, which would only set back Iran’s program for a fraction of the time,” she said.

The AIPAC activists received Rice warmly, ignoring calls from some right wing figures to stay away from her talk after she said last week that Israeli Prime Minister Benjamin Netanyahu’s planned speech to Congress was “destructive” of the U.S.-Israel relationship.

AIPAC favors legislation that would trigger new sanctions should Iran walk away from the talks and would subject any deal to congressional review. President Obama Obama has pledged to veto the legislation.

“Additional sanctions or restrictive legislation enacted during the negotiation would blow up the talks, divide the international community, and cause the United States to be blamed for the failure to reach a deal,’” Rice said.

She earned cheers for saying emphatically that Obama would consider “all options,” a euphemism for military action, should the talks fail.

However, activists also pointedly cheered whenever Rice described the views of skeptics of the talks in order to rebut them.

“I know that some argue we should just impose sanctions and walk away” if the talks collapse, was one such unintended applause line. “I know that some of you will be urging Congress to insist that Iran forego its domestic enrichment capacity entirely” was another.