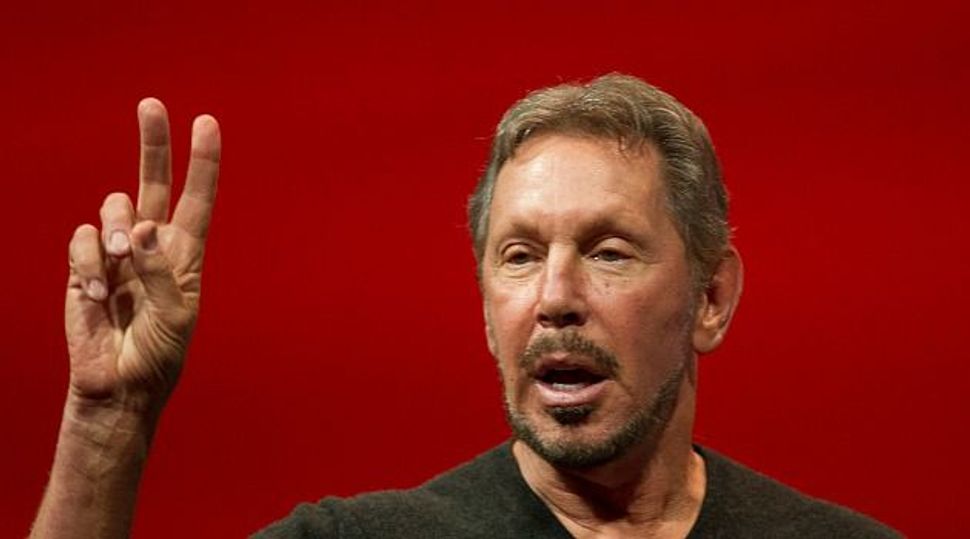 Larry Ellison is still the richest Jew on the Forbes billionaires list, but some new faces have entered the exclusive club. Image by getty images

(JTA) — The billionaires’ club isn’t as exclusive as it used to be.

On Monday Forbes released its 29th annual list of every billionaire on the planet, and it features a record 1,826 people, or 181 more than last year.

As in previous years, Jews are disproportionately represented on the roster of the world’s wealthiest, with 10 Jews among the top 50. (The list, topped by Bill Gates, ranks from richest to slightly less rich.)

Larry Ellison, the founder of the tech giant Oracle Corporation, is the wealthiest Jew in the world and the fifth wealthiest person alive. At age 70, his net worth is $54.2 billion.

With a net worth of $35.5 billion, former New York City Mayor Michael Bloomberg is the second wealthiest Jew on the list and 14th wealthiest person overall. Mark Zuckerberg, still one of the world’s youngest billionaires at age 30, climbed five spots on the list to number 16 overall. His net worth has grown to $33.4 billion.

There are several Jews among the newcomers on the list as well, including Russ Weiner, the founder and CEO of Rockstar energy drinks, Jerry Reinsdorf, the owner of the Chicago Bulls and the Chicago White Sox sports franchises, and Ken Grossman, a co-founder of the Sierra Nevada Brewing Co. Weiner is the son of prominent conservative radio talk show host Michael Savage (born Michael Weiner). Seth Klarman, an investor in the Times of Israel, is also on the list, with a net worth of $1.5 billion.

While men far outnumber women on the list, a few Jewish women are on it, including Shari Arison ($4.4 billion), Karen Pritzker ($4.3 billion), Lynn Schusterman ($3.7 billion) and Doris Fisher ($3.2 billion). With a net worth of $1 billion, Sheryl Sandberg, of Facebook and “Lean In” fame, just makes the cutoff for the list.