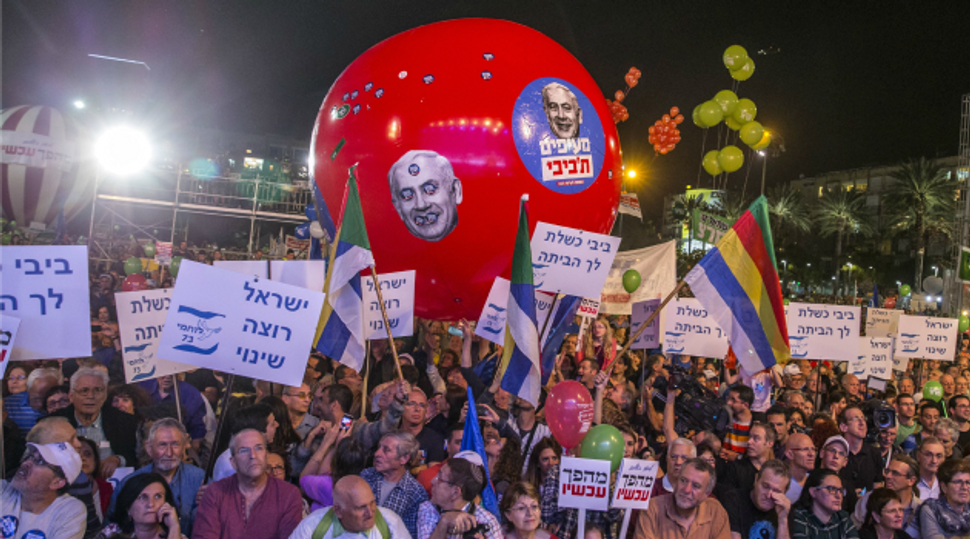 United Against Bibi: Israelis take part in a rally to ask for a change in the Israeli government. Image by Getty Images

Tens of thousands of Israelis gathered at a rally in Tel Aviv’s Rabin Square calling for a change in the government.

The anti-Netanyahu rally held on Saturday night, which attracted up to 40,000 people, was billed as the “Israel Wants Change” event, and was organized by the One Million Hands movement, a grassroots campaign against right-wing Israeli political parties which calls for a focus on socio-economic issues.

Dagan accused Prime Minister Benjamin Netanyahu of “dragging us down to a bi-national state and to the end of the Zionist dream.”

Dagan’s remarks at the rally come after an interview aired Friday night on Channel 2 in which the former Mossad chief attacked Netanyahu and Jewish Home Party head Naftali Bennett for policies causing problems with the Palestinians and with the Unites States.

Other speakers at the rally included Michal Kastan Keidar, widow of an officer killed in last summer’s Operation Protective Edge, who accused Netanyahu of being more concerned with Iran than the Israeli-Palestinian conflict, and former GOC Northern Command and deputy Mossad chief Amiram Levin, who was one of Netanyahu’s commanders in the Israel Defense Forces.

A pro-Netanyahu rally is scheduled for the same venue next Saturday night. Israeli national elections will be held on March 17.