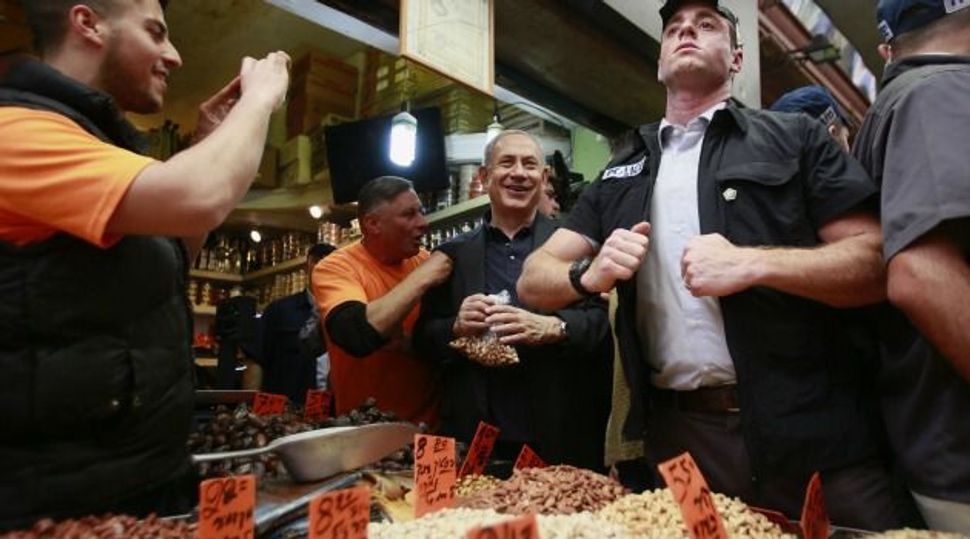 (Reuters) — In the past, Prime Minister Benjamin Netanyahu’s right-wing Likud party could count on Israelis like 50-year-old shopkeeper Yossi Levy when it came to election day.

Levy, who describes himself as a lifelong Likud voter, is a member of Israel’s Sephardic community – Jews of Middle Eastern descent who, attracted by a tough stance towards Arab enemies, have traditionally been the party’s backbone.

But political analysts say Sephardim, disproportionately poorer than Israel’s Ashkenazi Jews with roots in Europe, may throw their support elsewhere in the March 17 election, angry over the high cost of living and housing prices.

“War is something we live with all the time, now all that interests me is keeping the refrigerator full,” Levy said at a grocery shop in a market in the Talpiot fruit and vegetable market in the northern city of Haifa.

Netanyahu’s battle to preserve Sephardic backing in Israel’s lower-income areas is being played out in places such as the Haifa marketplace and Jerusalem’s Mahane Yehuda market, where the prime minister himself made an appearance on Monday.

But in a departure from tradition, reporters were not given advance notice of Netanyahu’s visit – a sign, some commentators said, of campaign concerns of a lukewarm welcome in what has long been a bastion of Likud support.

Video that emerged from the visit showed shoppers applauding Netanyahu as he promised them a “prosperous Jerusalem” if they voted Likud.

But one cafe owner, who served Netanyahu a latte, said she made a symbolic protest by handing him 87 shekels ($22) in a fistful of coins as change for his order, which he paid for with a 100 shekel ($25) bill.

“It was important to remind him that while he invokes the Iranian (nuclear) threat, we, the small business owners, have a daily struggle to earn even small change,” she said.

Likud dispatched a fiery Sephardic legislator, Miri Regev, to the market in Haifa to make its case.

“You have to vote for Likud, we’ve done more than anyone,” Regev, a former brigadier general and political hardliner of Moroccan origin, shouted through a microphone at shoppers.

Regev, 49, has been visiting far-flung and hardscrabble towns in a trailer emblazoned with her portrait and the Likud logo.

“The more that people from the periphery go and vote, the greater the number of votes there will be for Likud,” Regev told Reuters over a spinach turnover, a popular Sephardic dish.

Shmuel Sandler, a political scientist at Bar-Ilan University near Tel Aviv, acknowledged “a traditional vote for Likud among Sephardim.” But he added: “It’s not totally clear this time how it will go.”

In the Haifa market, some shoppers of Sephardic descent said they were weighing whether to switch their vote from Likud to a party with what they hope will be a more economics-minded agenda.

“Bibi has spit in our face. I don’t believe in anyone anymore,” shopper Shaul Sabag said, as Regev passed a vegetable stall where he stood. Levy, a cleaning materials salesman, said he also preferred not to cast any ballot at all.

Gideon Rahat, a political scientist at the Hebrew University of Jerusalem, said Levy’s case was an example of how poorer Israelis were growing more alienated from politics, once a rarer phenomenon in security-minded Israel than elsewhere.

“The ethnic vote doesn’t necessarily help Likud anymore, but that doesn’t mean they will swing behind Netanyahu’s rivals, either,” Rahat said. “Anti-Netanyahu sentiment won’t necessarily push people to vote for another party; they may just not vote at all.”

But Likud may be able to make up for lost votes if it partners with several centrist and religious parties that have been focusing on the Sephardic electorate.

Ultra-Orthodox Shas, or Sephardic Torah Guardians, and Kulanu, a centrist faction advocating economic reform, have signaled they would prefer to join a government headed by Netanyahu rather than by Herzog.