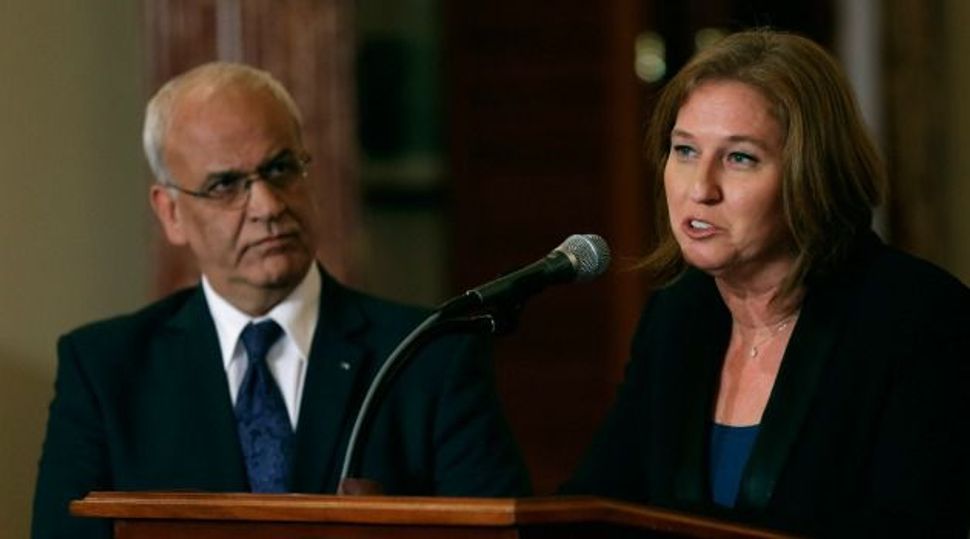 (JTA) — Part of the reason Israeli-Palestinian peace talks failed last year is because the sides were so far apart in their fundamental visions of what two states would look like. Another reason is that the two sides could barely stand each other.

Those are two of the contentions contained in a blistering critique of the failed 2013-2014 peace talks published March 2 by Ilan Goldenberg, the chief of staff for the U.S. negotiating team and now the director of the Middle East security program at the liberal think tank Center for a New American Security.

The 22-page paper, the most public accounting to date of the failure of the Obama administration’s months-long effort to broker a peace agreement between Israelis and Palestinians, is unusual in focusing less on the policy differences between the sides and more on the profoundly dysfunctional culture of recrimination and distrust.

Of the nine lessons Goldenberg draws from the talks, only two focus on policy. Goldenberg’s chief takeaway has to do with the mood in the room.

“Twenty years of inconclusive talks have poisoned the environment in the negotiating room, creating an atmosphere equivalent to a nasty and prolonged divorce,” Goldenberg writes.

The latest round of peace talks, launched in the summer of 2013 and slated to last nine months, was the Obama administration’s second attempt to settle the Israeli-Palestinian conflict. Secretary of State John Kerry engaged in intense shuttle diplomacy, meeting dozens of times with Israeli Prime Minister Benjamin Netanyahu and Palestinian Authority President Mahmoud Abbas in an attempt to cajole them into bringing decades of conflict to a peaceful resolution.

In April 2014, the talks collapsed. In their wake, Israel endured a bloody summer war in Gaza, deep wounds to its alliance with the United States and the further entrenchment of a sense of distrust that Goldenberg believes precludes a return to peace talks anytime soon. Netanyahu and Abbas simply distrust each other too profoundly to get to a deal, Goldenberg said.

“These guys can never do it together,” Goldenberg told JTA in an interview. “That’s for sure.”

The nastiness was expressed in petty insults, brinksmanship and an apparent eagerness by both sides to drive the other side crazy, according to Goldenberg.

“Like any divorce negotiation, the two parties know each other all too well,” Goldenberg writes. “They know one another better than the mediators know either of them. Each tends to use that knowledge to ‘press buttons’ on the other side to provoke and annoy.”

For their part, the Palestinians would make make outrageous assertions that caused Israel to retrench. In 2014, top Palestinian negotiator Saeb Erekat accused Israel of killing the late Palestinian leader Yasser Arafat and of plotting to do the same to Abbas.

In the paper, Goldenberg outlines how atmosphere affected policy. On repeated occasions, one side put an offer on the table and the other side would counteroffer with something the other side found unacceptable, leading to the withdrawal of the initial offer.

The mistrust meant that what should have been easy agreements turned into major obstacles. One example was Israel’s insistence that any deal acknowledge Israel’s status as a Jewish state. At the outset of the Oslo process, in 1993, the term was a given, and Arafat used it multiple times.

Israel began to insist on the phrase’s inclusion during the previous round of talks, in 2007-2008, just as the international movement to delegitimize the Jewish state was gaining traction. The more the Israelis insisted, the warier the Palestinians became, fearful that the move was an attempt to delegitimize the Palestinian historical narrative. What was once a small matter joined borders, security, Jerusalem and refugees as one of the crucial issues in the talks.

Goldenberg, 37, who was born in Israel and speaks fluent Hebrew, learned Arabic during his years at the University of Pennsylvania. Even though his American-born parents returned the family to the United States when he was 8, he maintains some Israeli mannerisms, like holding his thumb to his index and middle fingers to emphasize a point.

As in many divorces, the mediator — in this case, the Americans — took some hits. Among the most painful was Israeli Defense Minister Moshe Ya’alon’s description of Kerry as “messianic” and his accusation that the secretary of state was hankering for a Nobel Prize. Those jibes led to further American missteps.

“One of the things we tried to do, and didn’t succeed at, is not get pulled into it,” Goldenberg said, citing the anonymous U.S. official who called Netanyahu “chickenshit” in October.

“We can’t get pulled down into the muck of the politics,” he said.

Through it all, the American Jewish community remained “highly supportive” of the effort, Goldenberg writes. Laura Blumenfeld, a former senior policy adviser on the negotiating team whose job included strategic outreach to American Jewish groups, agreed, noting how the community overcame its internal rivalries to back the talks. She recalled a White House briefing in February 2014 that included not only young Jewish, Christian, Arab and Muslim leaders, but AIPAC and J Street all sitting at the same table. But the relationship between the United States and Israel suffered during the negotiations.

“If there was a marriage on the rocks, it was the Israeli-American relationship,” said Blumenfeld, now a scholar-in-residence at Georgetown University. “Some days it seemed there was more bickering than brokering.”