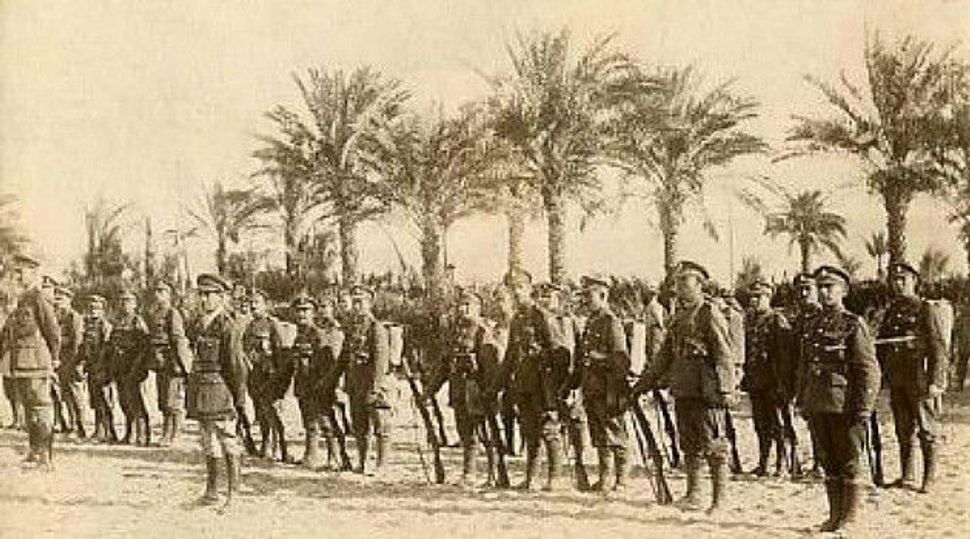 (JTA) — On a crisp morning in this community near the Mediterranean Sea, the sound of Israel’s flag whipping in the wind likely pleased the soul of John Henry Patterson, whose ashes were buried a few yards away.

Patterson was a lieutenant colonel in the British military, and during World War I he commanded the Zion Mule Corps and the Jewish Legion — the first Jewish military units in two millennia.

Although he was Christian, Patterson had expressed an interest in being buried in Israel alongside the men, many from prestate Israel, he had commanded. Patterson had been reared on the Bible and a love for the Jewish people and their land. But his family could not afford to transport the body to Israel when he died 67 years ago in Los Angeles.

In December, his wishes were finally honored: his remains and those of his wife, Frances, were moved to the cemetery at Avichail, a moshav founded by many of his soldiers.

The ceremony marking the transfer of the remains culminated several years of effort by a diverse cast of characters, among them Jerry Klinger, a history enthusiast from Washington, D.C.; Myrna Strapp, a civil litigator in Los Angeles recruited last year after several lawyers declined requests to handle the filings required to facilitate the transfer; Karen Washington, an African-American woman who worked at the Los Angeles cemetery where Patterson’s remains were interred originally; and Israeli Prime Minister Benjamin Netanyahu, who spoke at the gravesite and at the nearby Jewish Legion Museum and has personal ties to Patterson.

The reburial occurred just shy of the March 22 centennial of the British War Office’s appointing Patterson to lead the Zion Mule Corps, which would fight in Gallipoli, Turkey. The corps was disbanded in 1916, but later reconstituted as the Jewish Legion (also called the 38th Royal Fusiliers), with Patterson in command through 1918.

“The whole issue of the Jewish Legion is something that’s not so well known,” Yossi Ahimeir, director-general of the Jabotinsky Institute, said in an interview in his Tel Aviv office. “This is the year that we should connect Patterson and the Jewish Legion – and should [educate Israelis] that not all non-Jews were against Israel. There were Brits who helped the Jewish nation, and Patterson stood out the most.”

The path leading to the ceremony proved rocky.

Strapp, representing Patterson’s grandson, Alan, had to overcome a local law that permits only the child of the deceased to authorize moving the remains. A judge ruled against her, but Strapp won on appeal last summer. She, Klinger and Chizki Sivak, a lawyer residing at Avichail who is married to the granddaughter of a Zion Mule Corps officer, also needed approvals from such agencies as the Los Angeles Department of Public Health and the Netanya-area rabbinate in Israel.

On Aug. 13, Klinger, Strapp and Sivak, along with Israeli consular officials and a Netanyahu aide, collected the urns at the Angelus-Rosedale Cemetery mausoleum. A shroud was placed over the urns. Psalm 23 was recited.

With that, “the colonel was under the protection of the Israeli government,” Klinger said.

Strapp, who took the case as her final one before retiring, couldn’t be in Israel for the reinterment because she was preparing to make aliyah later that month. But she watched the broadcast transmission of the ceremony, which included Netanyahu noting that his late father, Ben-Zion, worked in England and in the United States with the Zionist leader Vladimir Jabotinsky and Patterson to advocate for a Jewish army to fight the Nazis.

When Benjamin Netanyahu’s elder brother was born in 1946, Ben-Zion bestowed upon Patterson the honor of sandak, or godfather. The boy, Jonathan, was named for Patterson and for Jonathan’s grandfather, Nathan Mileikowsky. Jonathan “Yoni” Netanyahu would become a lieutenant colonel like his namesake, and was killed leading the Entebbe rescue operation in 1976.

Patterson “can be called the godfather of the Israeli army,” the prime minister told the assembled as he stood before a screen that read in English, “Lieutenant-Colonel Patterson: We Salute You.”

“In doing what we are doing today, we are repaying a great historical debt and a personal debt to a great friend of our people, a great champion of Zionism, and a great believer in the Jewish state and the Jewish people,” Netanyahu said.

In October, Strapp and her husband plan to welcome Washington, the Los Angeles cemetery official, who will be visiting Israel with her church group. As it turns out, the Strapps’ central Jerusalem apartment stands just two miles from Patterson Street, named for the man who first brought Christians and Jews together in 1915 and is doing so still.