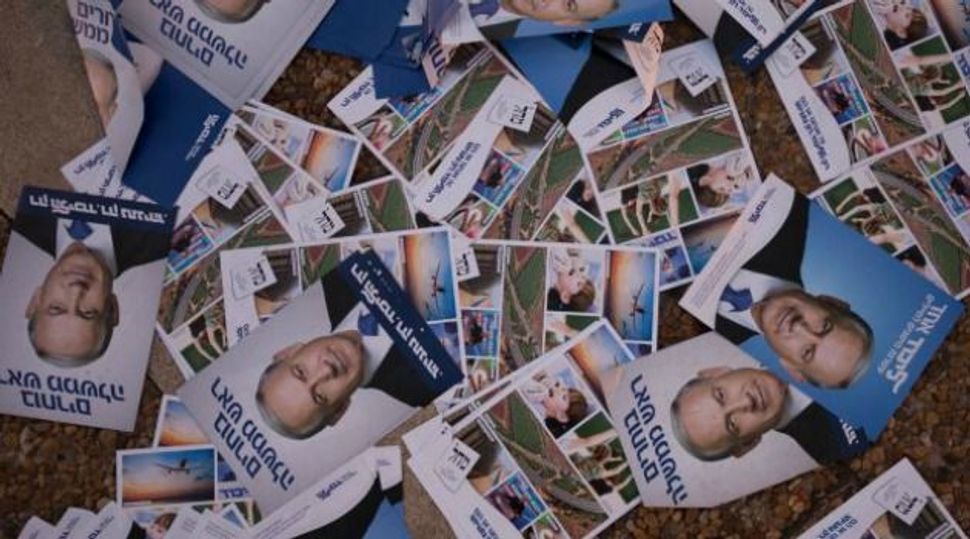 (Reuters) — Millions of Israelis turned out to vote on Tuesday in a tightly-fought election, with Prime Minister Benjamin Netanyahu facing an uphill battle to defeat a strong campaign by the center-left opposition to deny him a fourth term in office.

In many respects the election has turned into a referendum on “Bibi” Netanyahu, 65, who has been in power for a total of nine years spread over three terms.

If he wins he would be on track to become Israel’s longest-serving prime minister, but would probably also prolong a prickly relationship with the country’s main ally, the United States, at least as long as Barack Obama is in the White House.

Netanyahu has focused on the threat from Iran’s nuclear program and militant Islam. But many Israelis say they are tiring of this message, and the center-left’s campaign on social and economic issues, especially the high cost of housing and everyday living in Israel, appears to have won support.

In a possible sign of edginess, Netanyahu took to Facebook to denounce what he said was an effort by left-wing non-profit groups to get Arab-Israelis out to sway the election against him. “The right-wing government is in danger,” he wrote. “Arab voters are going to vote in droves. Left-wing NGOs are bringing them in buses.”

When the last opinion polls were published on March 13, the center-left Zionist Union led by Isaac Herzog held a four-seat lead over Netanyahu’s Likud, a margin that had the opposition set for a surprise victory.

But in the last days of campaigning, Netanyahu fought to shore up his Likud base and lure voters from other right-wing, nationalist parties, promising more building of Jewish settlements and saying the Palestinians would not get their own state if he were re-elected.

But they may go some way towards persuading voters to stick with what they know, rather than another candidate on the right.

Surveys show around 15 percent of voters are undecided, meaning the result could swing widely – opinion polls have rarely been good predictors of Israeli elections in the past.

By 2 pm (1200 GMT), turnout was running just below the last election at around 37 percent. Voting ends at 10 pm, with the first exit polls published immediately afterwards.

If Netanyahu can draw votes from other right-wing parties, he may be in a position to be asked first by Israel’s president to try to form a governing coalition.

No party has ever won an outright majority in Israel’s 67-year history. Coalition-building is an unpredictable game, with any number of allegiances possible among the 10 or 11 parties expected to win a place in the 120-seat Knesset.

It is also takes time: the party invited to try to form a government has up to 42 days to negotiate a coalition. It may be mid-May before Israel has a new government.

Since there are more parties on the right and far-right, Netanyahu is probably better placed to cobble together a coalition, even if he narrowly loses the vote. But if the center-left wins by four or more seats, it should get the nod first to try to form a government.

Under sunny skies, Netanyahu went to vote early with his wife at a school near their home in Jerusalem. He acknowledged that it was a tight race and urged voters to back the right. “To prevent the rise to power of a left-wing party, there is only one thing to do – close the gap,” he said.

Herzog, who has overcome criticism of his slight stature and reedy voice to lead a resilient campaign, voted in Tel Aviv, where he emphasized that the election was about a new direction.

“Whoever wants to continue the way of Bibi – despair and disappointment – can vote for him,” he said. “But whoever wants change, hope, and really a better future for Israel, vote for the Zionist Union under my leadership.”

The son of a former president and the grandson of an eminent rabbi, Herzog, 54, is as close as it gets to having Kennedy-style heritage in Israel. While his leadership has been criticized in the past, he has shown wit and intellect on the campaign trail, bolstering his image among voters.

“For the first time in my life, I’m going to be voting for Labor, that is the Zionist Union,” said Dedi Cohen, 39, a lawyer in Tel Aviv. “The risk of Netanyahu building the next government is too big. How long has he been in power? Nine years? It’s too much. Enough.”

Three or four parties are likely to decide how the balance of power tips in the coalition building.

Moshe Kahlon, the leader of Kulanu, a centrist party that broke away from Likud, is seen as perhaps the most important “kingmaker.” A former communications minister credited with bringing down mobile phone prices, Kahlon could ally with either Netanyahu or Herzog, bringing up to 10 seats with him.

One of the party’s candidates, Michael Oren, has said that whoever wins must try to repair relations with the United States, which have been under particular strain since Netanyahu addressed Congress on March 3, attacking a possible nuclear deal with Iran sought by Obama.

Yair Lapid, the leader of the centrist Yesh Atid party, could also ally with either side, bringing 12-14 seats. But he does not sit comfortably with religious parties, making him less flexible in coalition talks.

If the center-left is to assemble a coalition, it will also need the support of ultra-Orthodox parties, which are expected to win around 13 seats.

Another factor is the parties from Israel’s 20 percent Arab minority, which for the first time have united under one list and are expected to win around 13 seats as well. While they are unlikely to join a center-left coalition, they could give it tacit support and create a block against Netanyahu.