Israelis Sound Off on Bibi — Pro and Con 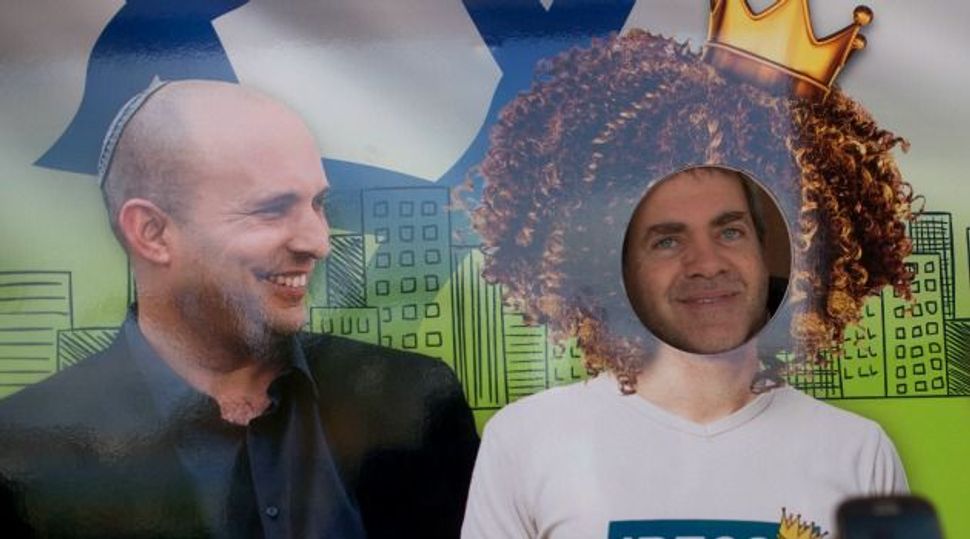 He’s the Man: A Jewish settler in the West Bank poses for photo next to life-sized poster of far right leader Naftali Bennett. Image by getty images

Israelis turned out in large numbers for a parliamentary election on Tuesday, with Prime Minister Benjamin “Bibi” Netanyahu seeking a fourth term but facing a strong challenge from the center-left opposition.

Nearly six million people are eligible to vote, with turnout expected to be slightly over 60 percent. Polls close at 10 pm (2000 GMT) on Tuesday.

Netanyahu’s main challenger is Isaac Herzog, the leader of the Zionist Union, who is partnered by Tzipi Livni, a former justice minister and peace negotiator with the Palestinians.

Other leading candidates are Naftali Bennett of the far-right Jewish Home party; Moshe Kahlon of the centrist Kulanu; Yair Lapid of the centrist, secular Yesh Atid party; and Avigdor Lieberman of the ultra-nationalist Yisrael Beitenu party.

Here are comments from ordinary Israelis who were heading to the ballot box or had just voted.

Sarah Zadok, 38, a teacher from the town of Yonaton near the Syrian border, who was voting for Bennett:

“I care less about Netanyahu’s prospects than I do about the safety of Israel. I hear the fighting next door and I’m aware of the dangers facing us. In Bennett I see real leadership and a plan.”

Alon Gal, 49, a manager at a high-tech firm from Mevaseret Zion near Jerusalem:

“I’m voting for the right but am in a dilemma over which party. I’m not keen on Netanyahu’s conduct, his arrogance, but on the other hand, I don’t inadvertently want to help bring a left-wing government to power.”

“For the first time in my life, I’m going to be voting Labor, that is the Zionist Union. Previously I voted for centrist parties, but now the risk of Netanyahu building the next government is too big. How long has he been in power? Nine years? It’s too much. Enough.”

At a cafe in Kfar Tavor, near the northern city of Haifa:

Yuval Weisler, 27, an engineering student, said he voted Yesh Atid, as he has done before.

“I think Lapid has the right approach to economic policy, I like the way he’s helped the middle class, and I’m worried what would happen if the right-wing grows stronger than the center bloc.”

“I’m expecting the left to win, and it’s important to balance that out with a party that’s more centrist.”

“I voted Lapid because we need to reinforce the center-left bloc. There are a lot of extremists in Israel, Bibi is way too extremely right-wing, so is Bennett. And I think Herzog is too far left.”

“Last time I voted for Lapid, and before that, Kadima. This time I chose Emet (Herzog).”

“We have but one country and I can’t stand Bibi anymore. He’s shutting off the only lifeline Israel has to the outside world – our friendship with America.”

“I’m a Likud voter. There’s nobody better than Netanyahu, nobody stronger.”

“I’m a right-winger, and Likud is the house I grew up in so I voted for Bibi, he’s the best spokesman Israel has.”

She says her views are more akin to Jewish Home though, and the reason she stuck by Likud is “I’m worried Bibi is going to lose.”

“We must change the government, and Herzog needs more mandates. Bibi isn’t leading us in the right direction, neither diplomatically or economically.”

Moshe Goldring, 69, a physician from Kfar Tavor. Has always voted for the far-left Meretz party, and same this time.

“We need their influence. Labor has taken on Livni and she’s a Likudnik at heart.”

“Netanyahu is the worst thing that ever happened to Israel.”

“We need to make peace with the Palestinians, without that we will never have security. I worry that my grandchildren will have to fight another war unless we finally take steps for peace.”

“The main thing is we don’t want Netanyahu to win. We need peace so we can all just live together equally.”

“I voted Meretz because of their social platform, they are a very socially minded party looking out for the rights of minorities. I wouldn’t want them as prime minister but it would be good to have a far-left party in government to balance out the other sides.

“I debated between voting for the Zionist Union, or what I call a ‘not Bibi’ vote, and Meretz, and in the end I went with my heart. But if Bibi is reelected then my heart will have a very heavy conscience.”

Israelis Sound Off on Bibi — Pro and Con