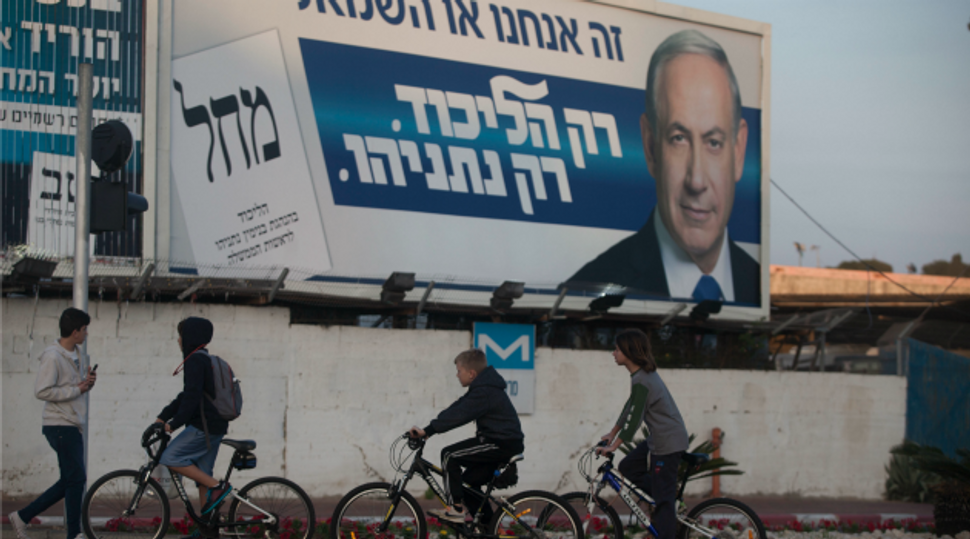 We will update this post as more results come in.

Prime Minister Benjamin Netanyahu closed a gap with center-left rival Isaac Herzog in a hard-fought Israeli election on Tuesday, exit polls showed, leaving both men with a chance to rule but Netanyahu with the clearer path to forming a coalition.

A new centrist party, Kulanu, led by a former member of Netanyahu’s right-wing Likud, seemed destined to emerge the kingmaker in possibly weeks of coalition negotiations.

Two television polls, for Channel 10 and Channel 1, said Likud and Herzog’s Zionist Union had each secured 27 seats each in the 120-member Knesset. Channel 2 gave Netanyahu a narrow edge, with 28 to 27 for his challenger.

Final results are not expected until early on Wednesday morning.

In the final days of the campaign, opinion polls had given Zionist Union a lead of three to four seats over Likud, a margin that appeared to give Herzog a fighting chance to score an upset over the prime minister.

The election had turned into a referendum on whether Israelis had grown tired of the leader they call “Bibi” after nine years in power spread over three terms.

Netanyahu took extraordinary steps to drum up support from right-wing voters, reversing policy on the eve of the election with an announcement that he would never allow a Palestinian state.

On election day he accused left-wing groups of trying to remove him from power by busing Arab Israeli voters to polling stations, a statement that drew a sharp rebuke from Washington.

If the exit polls prove accurate, Netanyahu could have smoother path towards a coalition, with right-wing and religious parties his traditional allies.

But Herzog also could prevail, should Kulanu and a bloc of Arab Israelis – which the polls predicted would be Israel’s third largest party – throw their support behind him.

A national unity government grouping both major parties is also possible. Before the vote, Netanyahu rejected such a coalition.

A fourth Netanyahu term would probably also prolong his prickly relationship with Israel’s main ally, the United States, at least as long as Barack Obama is in the White House.

Netanyahu has focused on the threat from Iran’s nuclear program and militant Islam. But many Israelis say they are tiring of the message, and the center-left’s campaign on social and economic issues, especially the high cost of housing and everyday living in Israel, appears to have won support.

In a possible sign of edginess, Netanyahu took to Facebook to denounce what he said was an effort by left-wing non-profit groups to get Arab-Israelis out to sway the election against him. “The right-wing government is in danger,” he wrote. “Arab voters are going to vote in droves. Left-wing NGOs are bringing them in buses.”

That drew a rebuke from Washington, where the Obama administration is already angry with Netanyahu for delivering a speech to Congress opposing its nuclear talks with Iran.

Some political rivals even accused Netanyahu of racism over the remarks.

In the last days of campaigning, Netanyahu has fought to shore up his Likud base and lure voters from other right-wing, nationalist parties, promising more building of Jewish settlements and saying the Palestinians would not get their own state if he were re-elected.

When Netanyahu called the election in December, two years early, he looked set for an easy victory. But in the final weeks there has been a sense that change could be in the air. Some voters have talked of Netanyahu fatigue.

No party has ever won an outright majority in Israel’s 67-year history. It is up to Israel’s president, after consulting with parties that won seats in parliament, to choose a leader to try to form a coalition.

The nominee will have up to 42 days to negotiate a coalition, and it may be mid-May at the earliest before Israel has a new government.

Moshe Kahlon, the leader of Kulanu, a centrist party that broke away from Likud, is seen as perhaps the most important “kingmaker,” with the exit polls giving him 9-10 seats. A former communications minister credited with bringing down mobile phone prices, Kahlon could ally with either Netanyahu or Herzog.

Yair Lapid, the leader of the centrist Yesh Atid party, could also ally with either side. According to the exit polls, he will receive 11-12 seats. But he does not sit comfortably with religious parties, making him less flexible in coalition talks.

If the center-left is to assemble a coalition, it will also need the support of ultra-Orthodox parties, which the polls said would win 13-14 seats.

Another factor is the parties from Israel’s 20 percent Arab minority, which for the first time have united under one list that exit polls said would win 12 to 13 seats.

While they are unlikely to join a government, they could give a center-left coalition tacit support and create a block against Netanyahu.