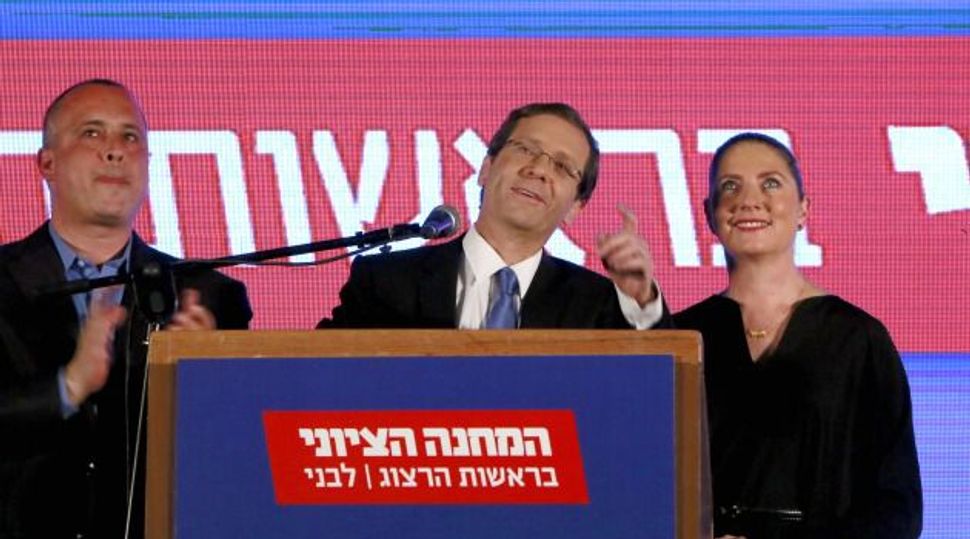 Defeated: Isaac Herzog delivers a speech next to his wife Michal as he reacts to exit poll figures in Israel’s parliamentary elections. Image by Getty Images

On Wednesday morning Herzog told reporters outside of his home that he spoke by phone with the prime minister and “congratulated him on his achievement and wished him good luck.”

“The nation has had its say, and we have to respect that,” Herzog said.

With 99 percent of the ballots counted, the Likud party surged overnight to 30 seats, while the Zionist Union dropped from initial exit poll data to 24.

Netanyahu reportedly spoke with the leaders of the parties likely to become part of a right-wing government coalition, including the Jewish Home, Yisrael Beiteinu, Shas and United Torah Judaism parties.

Left-wing Meretz Party chairman Zahava Gal-on, which just broke the threshold to be included in the Knesset with four seats, down from six in 2013, announced Wednesday morning that if the party’s seat total remains at four she would give up her Knesset seat and quit politics, remaining as party chairman until the party elects a new leader.

Final election results will be confirmed on Thursday morning.