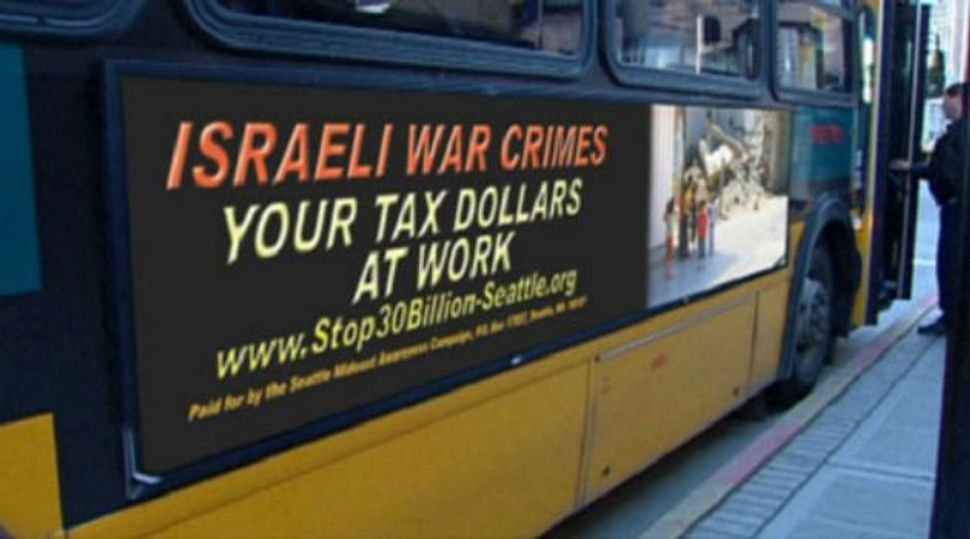 (Reuters) — County officials in Seattle can prohibit an advertisement criticizing Israeli policies toward Palestinians from appearing on local buses without violating constitutional protections on free speech, a U.S. appeals court said on Wednesday.

In a 2-1 ruling, the 9th U.S. Circuit Court of Appeals in San Francisco found that Kings County acted reasonably when it barred the ad, which sparked threats of vandalism and violence that could have endangered passengers.

Neither a Kings County spokesman nor a representative for the American Civil Liberties Union of Washington Foundation, which challenged the ban, was immediately available for comment.

In 2010, a non-profit group opposed to U.S. support for Israel proposed a bus ad that read: “ISRAELI WAR CRIMES YOUR TAX DOLLARS AT WORK,” along with a website address. The county originally flagged the ad as controversial, but decided it did not violate bus advertising policy and approved it.

After a local news broadcast about the impending ad, officials faced a public furor. Photos depicting dead or injured bus passengers appeared under the door of a transportation authority service center, the ruling said.

The county eventually rejected that ad, along with others proposed by pro-Israel groups. The pro-Palestinian Seattle Mideast Awareness Campaign sued, and a judge in a lower court sided with the county.

“Because the county simultaneously rejected all of the proposed ads on the Israeli-Palestinian conflict – from opposing viewpoints – no reasonable jury could find that it engaged in viewpoint discrimination,” 9th Circuit Judge Paul Watford wrote on Wednesday.

In dissent, Judge Morgan Christen said that while safety is a concern, “it also may be that the county inappropriately bowed to a ‘heckler’s veto’ and suppressed speech that should have been protected.”

She said the case should have been sent back to the lower court for more fact-finding.