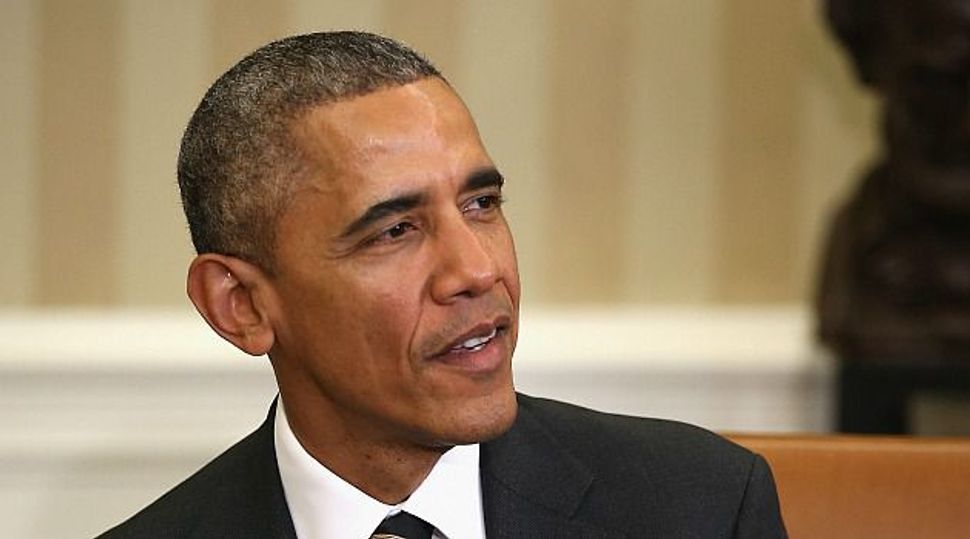 President Barack Obama told Benjamin Netanyahu on Thursday that Washington would “reassess” its options on U.S.-Israel relations and Middle East diplomacy after the Israeli prime minister took a position against Palestinian statehood during his re-election campaign, a White House official said.

Obama’s telephone call to Netanyahu followed a television interview in which the Israeli leader backed away from his pre-election declaration that there would be no Palestinian state on his watch, an about-face apparently aimed at quelling U.S. criticism triggered by his comments.

The White House, unmoved by Netanyahu’s effort to backtrack, delivered a fresh rebuke against him on Thursday and signaled that Washington may reconsider its decades-old policy of shielding close ally Israel from international pressure at the United Nations.

An official statement put out later in the day said Obama called Netanyahu to congratulate him on his election win and used the opportunity to reaffirm his commitment to a two-state solution, a longtime cornerstone of U.S. policy on the Middle East conflict.

But Obama also delivered a blunt message that underscored the seriousness of the U.S.-Israel rift. “The president told the prime minister that we will need to reassess our options following the prime minister’s new positions and comments regarding the two-state solution,” the White House official said, speaking on condition of anonymity.

White House spokesman Josh Earnest warned earlier that there would be “consequences” for Israel as the Obama administration monitors the formation of Netanyahu’s new ruling coalition.

“He walked back from commitments that Israel had previously made to a two-state solution,” Earnest told reporters. “It is … cause for the United States to evaluate what our path is forward.”

Obama told the Israeli leader he values the close security partnership between their countries and the two agreed to keep consulting on resolving the Israeli-Palestinian conflict,” the White House said in its statement.

“I haven’t changed my policy. I never retracted my speech in Bar-Ilan University six years ago calling for a demilitarized Palestinian state that recognizes the Jewish state,” Netanyahu told MSNBC in his first U.S. television interview since winning the bitterly contested Israeli ballot.

“What has changed is the reality,” Netanyahu said, citing the Palestinian Authority’s refusal to recognize Israel as the homeland of the Jewish people and the Hamas militant group’s continued control of the Gaza Strip.

The harsh U.S. response signaled that relations with Israel, already at their lowest point since Obama took office, could deteriorate further as an end-of-March deadline looms in U.S.-led nuclear diplomacy with Iran that Netanyahu vehemently opposes.

Among the most serious risks for Israel would be a shift in Washington’s posture at the United Nations. The United States has long stood in the way of Palestinian efforts to get a U.N. resolution recognizing its statehood, including threatening to use its veto, and has protected Israel from efforts to isolate it internationally.

QUESTIONS ABOUT U.S. SHIELD AT UN

Earnest left the door open to the possibility that Washington might be less diligent about shielding Israel diplomatically in the future.

“Steps that the United States has taken at the United Nations had been predicated on this idea that the two-state solution is the best outcome,” he said. “Now our ally in these talks has said that they are no longer committed to that solution.”

Netanyahu touched off the diplomatic storm with his comments on the eve of Tuesday’s election that he would not allow a Palestinian state, widely seen as intended to mobilize his right-wing base when his electoral hopes were flagging.

The goal of Palestinian statehood is a central principle of U.S. diplomacy going back decades. But Obama’s previous peace efforts have failed and prospects for renewed diplomacy were already low.

U.S. officials scolded Netanyahu not only for abandoning his commitment to a Palestinian state but also for his election-day accusation that left-wingers were working to get Israel’s minority Arab voters out “in droves” to sway the election.

Netanyahu denied he had been trying to suppress the votes of Arab citizens or that his comments were racist.

Even as he backed away from his pre-election statement rejecting Palestinian statehood, Netanyahu made clear that he believed for now political and security conditions were not amenable.

Netanyahu’s frosty relations with Obama worsened when he accepted a Republican invitation to speak to Congress two weeks before the Israeli election, a move assailed by Democratic leaders as an insult to the presidency and a breach of protocol.