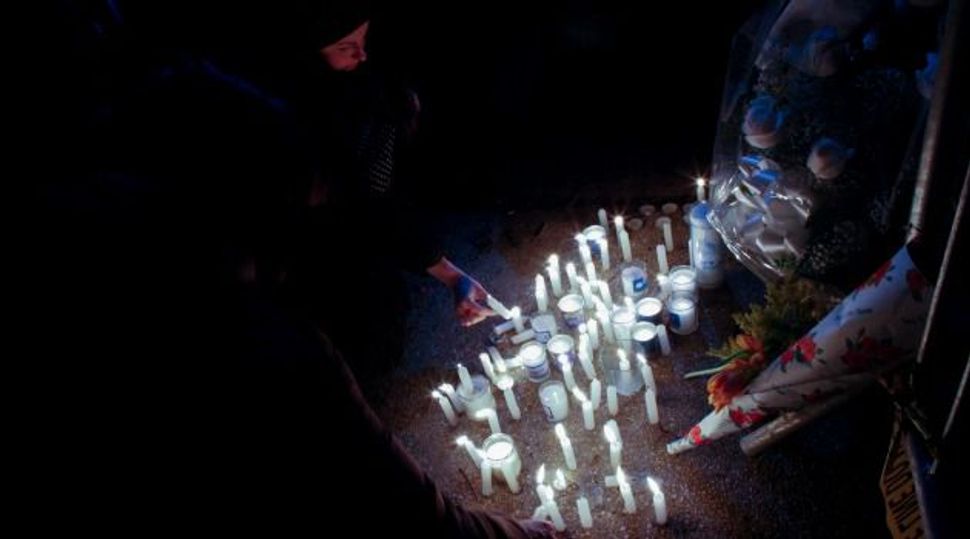 A woman lights a candle at the scene of a fire that killed seven Jewish children in Brooklyn. Image by Getty Images

Hundreds of mourners attended the funeral and burial in Israel of seven children who died in a house fire in Brooklyn.

“God Almighty took seven roses,” said their father, Gabriel Sassoon, in a eulogy at a Jerusalem cemetery on Monday afternoon, according to Ynet. “He took my children and my future grandchildren, maybe 70 or 80 of them, their smiles. To you, my God, I give my all. My soul, my all. That is how I feel.”

The mourners at the Givat Shaul Cemetery included close friends of the family, who had lived in Israel until two years ago, and strangers moved by the tragedy. David Lau, Israel’s chief Ashkenazi rabbi, called the fire an unspeakable tragedy and urged the family to remain strong, Haaretz reported.

“Each one is a flower in God’s garden,” he said.

Gabriel Sassoon was out of town at a religious conference when the fire consumed his home shortly after midnight Saturday. Officials have blamed an unattended hot plate warming Shabbat meals as the cause.

His wife, Gayle, and one of his daughters, Tziporah, 15, both escaped the blaze by leaping from the house but are fighting for their lives in the hospital. They are unaware of the seven deaths of the children, who were ages 5 to 16.

Gayle Sassoon reportedly had planned to take the children out of town for the weekend — to her parents’ home in southern New Jersey — but stayed home because of a snowstorm that hit the New York area.

About 1,000 people attended a funeral for the children in Brooklyn on Sunday before the bodies were flown to Israel for burial.

“They were a burnt offering,” Sassoon said of his children at Sunday’s funeral, referring to the seven “unblemished” lambs that were to be brought to the Temple in Jerusalem on the first of the month; the children died on the first day of the Jewish month of Nissan. “I lost everything in the fire. Seven pure sheep. Those are my seven children.”