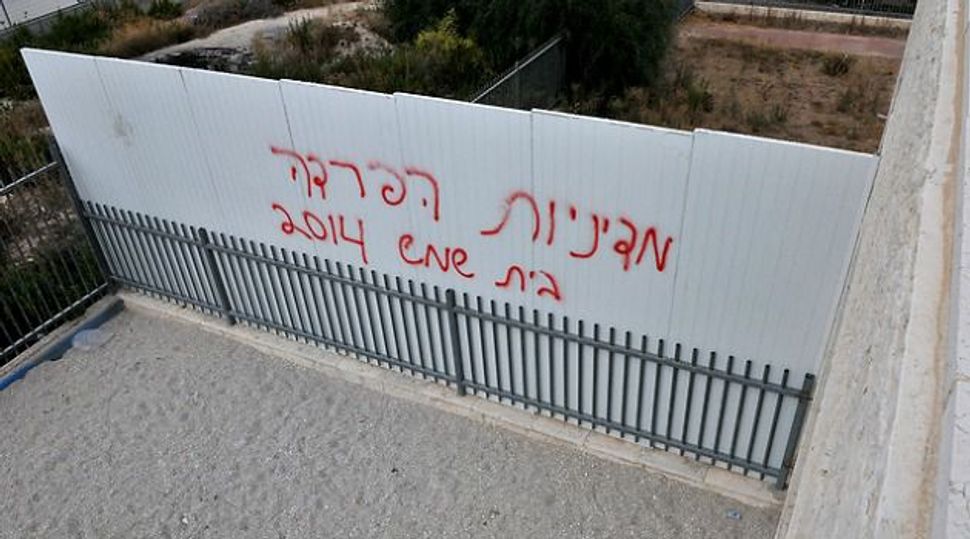 A wall in a Beit Shemesh school separates the Haredi students from the secular ones.

A secular school in Bet Shemesh that was divided to allow a haredi Orthodox girls school to have classes in the building will become a completely haredi school.

The secular Safot V’Tarbuyot School, or School for Languages and Culture, located in a haredi Orthodox neighborhood in Bet Shemesh, was under capacity by more than 300 students. The school will be moved next year to facilities elsewhere in the mixed community.

The haredi elementary school for girls, called Mishkenot Daat, will take over the whole building beginning in the 2015-2016 school year.

In September 2014, parents and teachers of the secular school protested when a floor for the building was separated for use by the haredi Orthodox school, and city construction workers erected an 8-foot-high wall down the middle of the schoolyard of the School for Languages and Culture.

The following month, under an agreement struck with the Jerusalem District Court, the Mishkenot Daat School moved out of the second floor of the Safot V’Tarbuyot School and operated out of mobile classrooms placed in the schoolyard.

In recent years Beit Shemesh, a city of 80,000 located just north of Jerusalem, has become a flashpoint for conflicts between Israel’s haredi Orthodox community and its secular and modern Orthodox populations. The school is located in the middle of the haredi Orthodox neighborhood of Ramat Beit Shemesh.