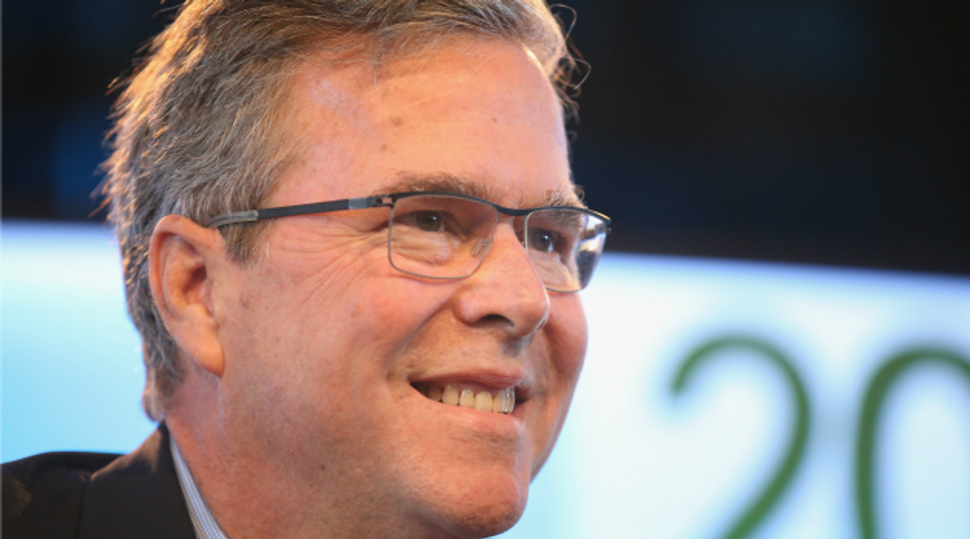 Jeb Bush said he disagrees with critical comments on Israel made by former Secretary of State James Baker, his unofficial foreign policy adviser.

Baker, a close friend of the Bush family, said at the liberal group J Street’s conference on Monday night that he was “disappointed” with Israeli Prime Minister Benjamin Netanyahu’s attitude toward a two-state solution.

“Frankly, I have been disappointed with the lack of progress regarding a lasting peace — and I have been for some time,” Baker said. He also said that when it comes to pushing for a two-state solution, Netanyahu’s “actions have not matched his rhetoric.”

In response, a spokeswoman for Jeb Bush, the former Florida governor and a potential Republican presidential candidate in 2016, said in an email on Tuesday, “While [Bush] respects Secretary Baker, he disagrees with the sentiments he expressed last night and opposes J Street’s advocacy.”

“Governor Bush’s support for Israel and Prime Minister Benjamin Netanyahu is unwavering,” the email from Kristy Campbell continued, “and he believes it’s critically important our two nations work seamlessly to achieve peace in the region.”

Baker reportedly said “f***| the Jews” in a private conversation while serving as secretary of state for Bush’s father, George H.W. Bush.

U.S. Sen. Ted Cruz of Texas said in a speech on Monday announcing his bid for the Republican presidential nomination that he would stand “unapologetically with Israel.” Cruz is the first to declare his candidacy for 2016.