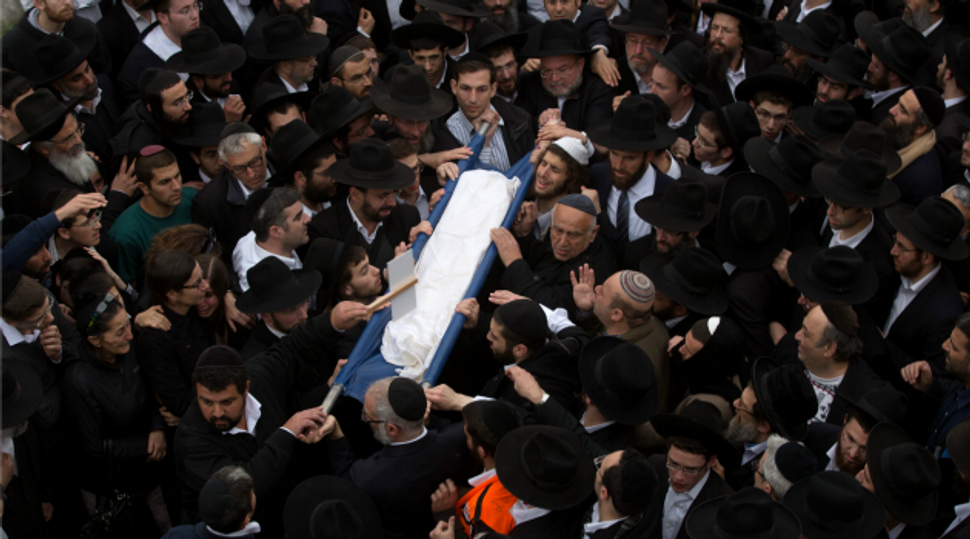 Hundreds gather in Israel to bury the seven children killed in a deadly Brooklyn blaze. Image by Getty Images

(JTA) — It was New York’s deadliest blaze since 2007, and there were only two survivors: mother Gayle Sassoon, 45, and daughter Tziporah, 15, who jumped from second-story windows to escape the flames sparked by a malfunctioning Shabbat hot plate in their home in the Midwood section of Brooklyn.

The other children could be heard screaming from their rooms, but rescuers could not reach them in time.

The victims’ father, Gabriel Sassoon, was away at a religious retreat in Manhattan when the fire struck. He learned about what happened only when New York Police Department officers located him at a synagogue on Saturday morning.

News of the tragedy spread quickly and cast a pall of grief over two communities separated by an ocean but united in mourning: New York, where the Sassoons had resided for the last couple of years and where Gayle grew up, and Jerusalem, where the family had lived previously. The Sassoon victims were flown to Israel for burial on Monday.

“God Almighty took seven roses,” Gabriel Sassoon said in his eulogy at the funeral, which was held at the Har Hamenuchot cemetery not far from the Orthodox Jerusalem neighborhood of Har Nof, where his children spent most of their lives. “He took my children and my future grandchildren, maybe 70 or 80 of them, their smiles. To you, my God, I give my all. My soul, my all.”

Gayle and Tziporah Sassoon are listed in critical condition in two separate hospitals in New York, suffering from burns and smoke inhalation. Tziporah has been asking about her siblings but has not yet been told the horrible news, Gabriel Sassoon reportedly said as the shiva began following Monday’s funeral.

On Sunday, at a service held for the children in Brooklyn, Sassoon called them a “burnt offering” — a reference to the seven “unblemished” lambs that were brought to the ancient temple in Jerusalem on the first of the month. The children died on the first day of the Jewish month of Nissan.

“I lost everything in the fire – seven pure sheep,” he said. “Those are my seven children.”

The fire shocked Brooklyn’s Orthodox community, and hundreds turned out to escort the bodies on Sunday. The day after the fire, the New York Fire Department set up tables in Midwood with literature about smoke detectors and advice on how to reduce the risk of fires from Sabbath and holiday observances.

This was not the first fire in the neighborhood to result from Jewish religious observances. In 2010, an 8-year-old boy was killed in his Midwood home on the Sukkot holiday in a blaze that also resulted from a malfunctioning hot plate. Over the years, other observant Jews have died in fires sparked by burning Sabbath or holiday candles.

Gayle and Gabriel Sassoon met in Israel around 1998, according to The New York Times. Both are of Syrian Jewish descent, but he had a particularly unusual upbringing, growing up in a Syrian Jewish outpost in Kobe, Japan. As a child he attended a Canadian international school founded as a Methodist missionary school in 1913, according to the Times, and became religious only later in life.

In 2013, the family moved into the Midwood home where Gayle had grown up. The children attended school at Yeshiva Ateret Torah in the nearby Sheepshead Bay section of Brooklyn.

The victims – three girls and four boys – were remembered as remarkable children who helped care for each other. They were identified as Eliane, 16; David, 12; Rivkah, 11; Yehoshua, 10; Moshe, 8; Sarah, 6; and Yaakov, 5.

Since the fire, Gabriel Sassoon said he has been overwhelmed and grateful for the support he has received from both Jews and non-Jews.

“I wasn’t only surprised by the greatness of Israel and Jews, but also by Americans and the New York Police Department,” he said, according to the New York Daily News.