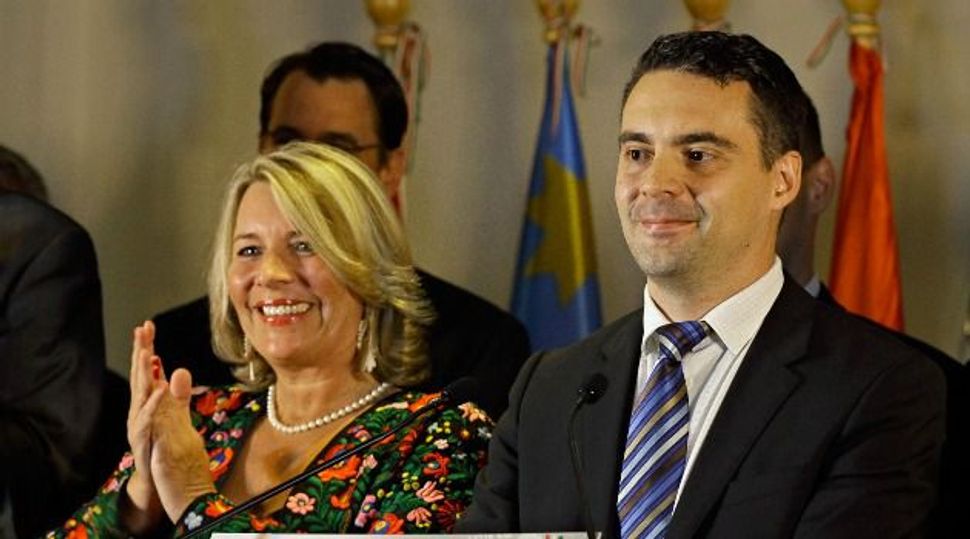 (Reuters) — The Hungarian far-right leader Gabor Vona, founder of a since disbanded paramilitary group who made a career vilifying the Roma and Jews, has cleaned up his previously hardline image.

Donning smart suits, he has softened his rhetoric and is wooing the mainstream voter, rather than any marginal groups. His personal makeover reflects his party Jobbik’s transformation from hard-line fringe movement to serious political contender.

So far, the strategy appears to be working: In the past year, support for Jobbik has surged to almost catch up with that of the ruling center-right Fidesz.

Last week, in the town of Tapolca western Hungary, a clean-shaven 37-year-old Vona made an appearance to support the local Jobbik candidate. Jobbik already holds the mayor’s post, and hopes to take seat formerly held by Fidesz in an April by-election.

During a town-hall style meeting in a sleepy rural suburb, Vona spoke of plans to restore services at the local hospital, combating official corruption and the region’s economic outlook. The word “Roma” was not uttered once.

“Our opponents may say this is only a media hack or a false turn, but time will tell,” Vona told Reuters. “I honestly want to transform Jobbik into a people’s party and to do that I know what is necessary. I know when and where to draw the line.”

Critics have cried foul, saying Jobbik’s core remains as extremist as ever, but this has not impeded its rise.

Support for Jobbik has rocketed by 50 percent in the past year to its highest-ever level, just as Fidesz recorded a steep plunge, according to pollster Ipsos. There are currently no other major players: Hungary’s Socialists, once a major political force, have not recovered since their crushing election defeat in 2010.

Ipsos put Jobbik’s national support at 18 percent against 21 for Fidesz, with around 40 percent undecided. Among under-30s, Jobbik leads already.

Along with its image revamp, Jobbik has benefited from a series of policy missteps by Prime Minister Viktor Orban and a perception that senior officials around him are using their posts to enrich themselves.

“Young people like us trust Jobbik,” said Tapolca bookkeeper Peter Korodi, 35. “They discuss problems that affect us here. I don’t think they are more radical than other right-wing parties. They are changing for the better.”

Korodi would not be drawn on Jobbik’s extremist track record, which has previously attracted international attention. In 2012, there was an outcry when a Jobbik leader said lists should be drawn up of Hungarians with Jewish roots.

“Voters fall for Jobbik’s campaign of cuteness,” Political Capital analyst Peter Kreko said. “If something does not appear fascist then they don’t recognize its fascism… I do not think there is real softening in Jobbik’s political content.”

Lajos Rig, Jobbik candidate in Tapolca, remains popular even after it emerged he once shared a Facebook post that described the Roma as “the Jews’ biological weapon against Hungarians.”

Local media also reported he has a tattoo of the words “Loyalty and Honor,” echoing the motto of Nazi Germany’s paramilitary organization the SS.

Rig said he re-distributed the Facebook post without paying attention to its contents, and said the tattoo was a wedding token to his wife and unrelated to the SS. He declined to show the tattoo to a Reuters reporter.

Jobbik’s strong poll showing may or may not translate into success in the next elections, due in 2018, Kreko said.

“At the moment Jobbik is the second-strongest party and a scenario is plausible where their role in forming a government is indispensable,” Kreko said. However, it is not unusual for governing parties to suffer a drop in popularity midway through their term, he said.

Fidesz has said it would not work with Jobbik, and Jobbik has ruled out entering a coalition. Indeed, the biggest hurdle to Jobbik gaining power nationally is its lack of partners.

“I never considered Jobbik palatable and I don’t now,” Janos Lazar, the prime minister’s chief of staff and a vice chairman of Fidesz, told the web site index.hu last week. “Fascists like Jobbik never brought this country any good.”

A far-right party in government would be a first in the European Union since Joerg Haider’s Freedom Party joined an Austrian coalition in 2000, isolating Vienna and leading to a revision of the EU’s founding treaty to allow sanctions if democratic commitments of a member state are in doubt.

Jobbik is part of a far-right surge across Europe, caused, sociologists say, by the economic slump and anger over immigration. Groups like France’s Front National and Greece’s Golden Dawn have also gained in popularity, although their success remains limited.

France’s National Front scored its best ever local election result in March but its chances for getting into power are tempered by widespread distaste for its far-right policies and an election system that allows voters to block it from office.

In Hungary, doubts persist that Jobbik’s softer image is here to stay.

“It’s one thing that they say the nice words now,” Erzsebet Kovacs, 50, a Fidesz supporter, said about Jobbik. “They always use sweet-talk during the campaigns. When there is no election, then they are scary, even their thoughts.”