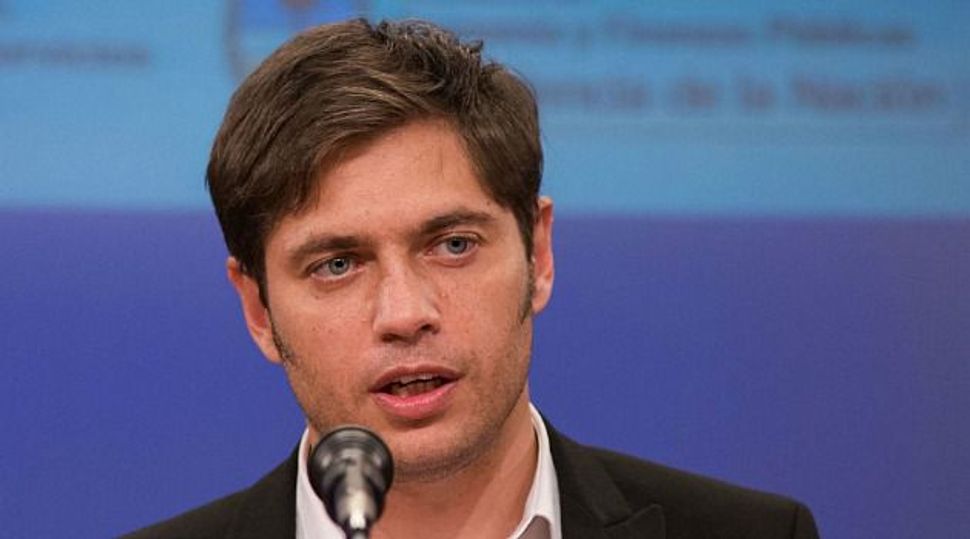 An Argentine union leader who called a government minister “little Jew boy” defended himself by saying “Everybody calls him this.”

In a radio interview Wednesday, Luis Barrionuevo, who heads the Blue and White CGT union, in discussing a national general strike initiated the previous day by his union, said the Minister of the Economy, Axel Kicillof, that “the little Jew boy gives no answer” to workers’ demands.

Barrionuevo used the term “el Rusito,” or “the little Russian,” to refer to Kicillof, who has a youthful appearance. “Russian” is a popular slang term used to refer to Jews in Argentina.

Alerted by the show’s host, Ernesto Tenembaum, that the language was offensive, Barrionuevo justified it by saying, “That’s how his Cabinet colleagues refer to him.” Cabinet chief Anibal Fernandez responded by saying in his daily meeting with journalists that “the little Russian is a brilliant minister.”

In another radio interview, Jewish journalist Martin Liberman asked Barrionuevo if he has problems with Jews.

“Everybody calls him this,” Barrionuevo said. “When I talk with members of the government, they refer to the minister as el Rusito. I didn’t discriminate against him. I have Jewish friends.”

The president of the national Jewish political umbrella DAIA, Julio Schlosser, told JTA that “these discriminatory expressions are very upsetting. We regret these statements by Luis Barrionuevo and condemn them.”

“Failure to do so can be interpreted as an endorsement of hatred against the Jewish community,” he said.

Television host and producer Gerardo Sofovich popularized calling Jews in Argentina Russians in a humorous fashion. He died three weeks ago at 77.