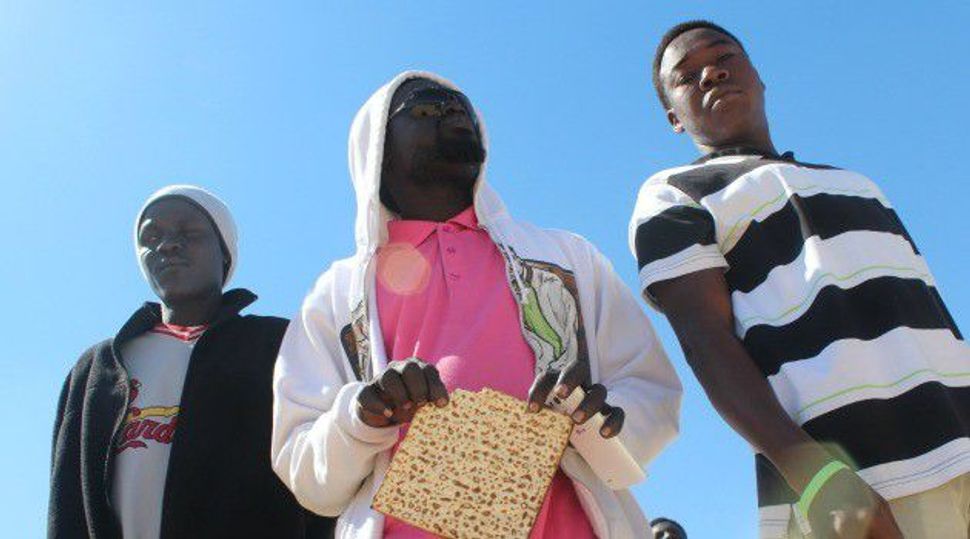 Next Stop Kigali? African immigrants celebrate a mock Seder at an Israeli detention center. Many may be deported to Rwanda. Image by ROY EDAN

Under the proposed agreement, which has come under scrutiny by human rights organizations, Israel would send hundreds of Eritrean and Sudanese nationals, many of them asylum-seekers, to Rwanda in return for favorable deals that include millions of dollars in grants, The East African reported Friday.

The information is based on statements made by Rwandan President Paul Kagame during a press conference in Kigali on Thursday, the paper reported. In addition to Rwanda, Israel is rumored to have reached a similar arrangement with Uganda, though neither Kampala nor Jerusalem confirmed this.

Asked by a reporter about the contacts, Kagame said he was not aware of the specifics but confirmed the talks were ongoing.

“On Rwanda and Israel, yes, I know there has been this discussion,” he said, “and it has been a debate in Israel about these Africans who have migrated to Israel as they do to other European countries. Some of them are either there illegally or with different status.”

Israel’s Interior Ministry confirmed this week in a statement that it will “expel immigrants from the detention centers” and encourage migrants “to leave Israel in a safe and respectable way” for specific African countries that would grant them legal immigration rights.

Approximately 50,000 Africans who entered Israel through Egypt live in Israel, which is bound by international treaties to let them stay while they have United Nations refugee status. However, they can be relocated to a third country willing to accept them. Israel’s deal with Rwanda and possibly with Uganda as well have been criticized by refugee rights groups, which have expressed concern over the human rights records of Rwanda and Uganda and questioned whether the refugees’ status would be honored once they arrive in Africa.

Many asylum-seekers are held in southern Israel’s Holot detention facility. In recent years, a new barrier along the Egypt-Israel border has stopped additional newcomers from arriving.