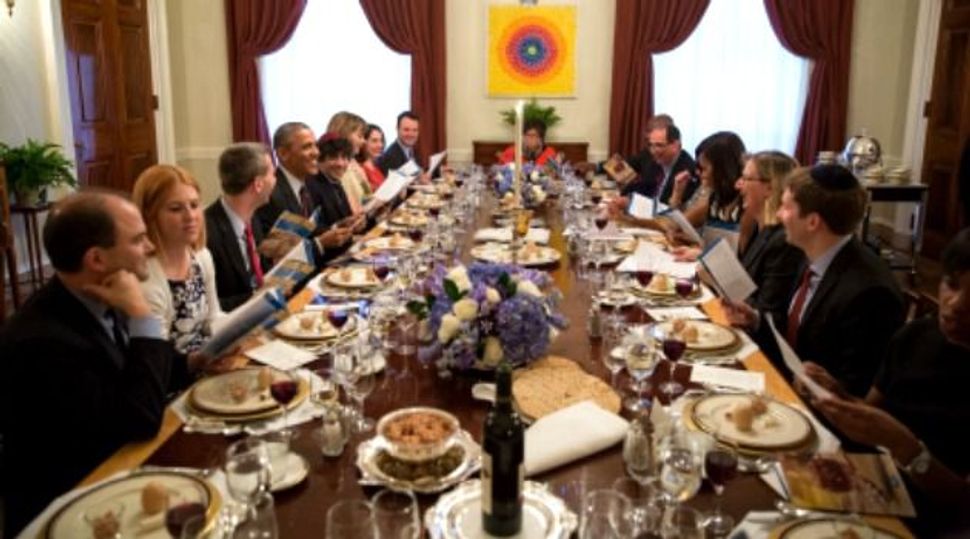 Moroccan haroset balls, savory holiday brisket and carrot souffle were on the menu at the annual White House Seder.

The guests finished the meal with raspberry ganache marjolaine, and triple layer chocolate macaroon cake, according to the White House.

The guest list for Friday night’s seder was not made public. It is the seventh time that President Barack Obama and his wife Michelle have hosted a White House Seder.

Susan Barocas, a Washington-based filmmaker and foodie, served as guest chef for the meal, alongside White House chef Cris Comerford, according to the White House, to create the meal that incorporated both Ashkenazic and Sephardic traditions and which included dishes prepared by family members of several of the Seder’s attendees.

In recounting the story of the Exodus from Egypt, the “joined their guests in performing the Seder rituals and followed the Haggadah’s command that we see ourselves as though we personally were liberated from Egypt. And they acknowledged how this story has inspired generations of Americans in the struggle for civil rights,” according to the White House.

President Obama issued Passover greetings on Friday to those celebrating Passover in the United States, in the state of Israel and throughout the world.

“The story of the Exodus – the signs and wonders that appeared when hope seemed lost, the Jewish people’s abiding belief that they would one day reach the Promised Land – has inspired countless generations over the years. It inspired Jewish families to hold fast to their faith, even during times of terrible persecution. It inspired young Civil Rights leaders as they marched across an Alabama bridge in search of their own Promised Land, half a century ago,” Obama said in his message.

“And it continues to inspire us today. Tonight, my family will read the passage of the Haggadah that declares we must see ourselves as though we personally were liberated from Egypt. The Exodus reminds us that progress has always come slow and the future has always been uncertain, but it also reminds there is always reason for hope,” he said.