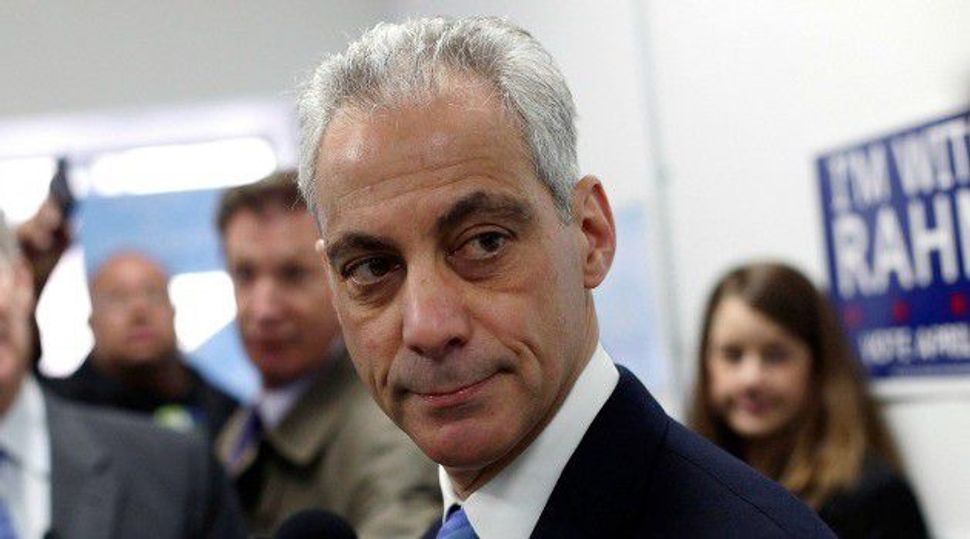 Chicago Mayor Rahm Emanuel won re-election on Tuesday against challenger Jesus “Chuy” Garcia in a hard-fought race, and heads into a second term with a mandate to lead a city on the brink of financial crisis and plagued by violent crime.

Emanuel, 55, spent millions of dollars on television and radio ads in his bid for re-election and held 56 percent of the vote to 44 percent for Garcia with 98 percent of precincts reporting, according to the city’s Board of Election Commissioners. Turnout was 44 percent.

With re-election, Emanuel now faces a host of challenges: a budget deficit expected to grow to $1.2 billion next year due to public pension payments, the need to reach a new contract with a teachers union that backed Garcia and violent crime that continues to vex the city.

The election represents a mixed victory for President Barack Obama’s former chief of staff. Four years ago, Emanuel won election outright with 55 percent of the first round of voting, despite facing five contenders. This time, he was forced into a runoff after failing to win a majority in the February primary, despite raising money in Hollywood and New York as well as Chicago.

Over a six-week-long non-partisan race, the battle between Democrats Emanuel and Garcia became a symbol for a national divide between the party’s moderates and the less well-funded progressive wing.

Garcia, 58, a Cook County commissioner and former state senator, got early traction criticizing Emanuel’s decision to close 50 schools, the largest school closure in U.S. history, and for continued high violent crime in poorer neighborhoods. The Chicago Teachers Union recruited Garcia to run and backed him with money and campaign workers.

But Emanuel attacked Garcia for lacking ideas to deal with the city’s fiscal problems.

A turning point came in mid-March when Garcia held a press conference to announce his financial plan and offered little more than a promise to form a task force after the election.

The election had a close following outside Chicago, particularly in the financial markets.

“I’m hoping that once the election gets out of the way there might be more of an ability to push through some things that might be needed,” said Daniel Solender, a lead portfolio manager for Lord Abbett, a firm that owns Chicago’s municipal bonds.

Emanuel, who has been criticized for what some call an arrogant manner, fought to rehabilitate himself with voters. He acknowledged in television ads that he can be abrasive, but said he fights for Chicago.

In his victory speech, Emanuel thanked voters for giving him a second chance and “putting me through my paces.”

“I will be a better mayor because of that,” said Emanuel.

Voters seemed to feel they had made their point. “Rahm may be a jerk but this is not a personality contest. It’s about who can lead this city forward,” said Alison Street, 46, a manager at a nonprofit organization, speaking at a polling place.

Kythzia Jurado, 40, a graphic designer and Garcia supporter attending the candidate’s election-night celebration, wiped away tears over his defeat.

“My main concern is that Rahm will continue to ignore the neighborhoods and focus on downtown,” Jurado said.

Another Garcia supporter, Marco Camacho, a public school teacher, said he is worried that the city will continue to see a depletion of school resources and that teachers will strike again this year, as they did in 2012.

But Dan Evola, 24, an Emanuel supporter and school custodian, said that the closed schools were bad and needed to be shut down.

Garcia had hoped to build a coalition of Hispanic and African-American voters, groups most affected by the closed schools and by violent crime, along with white progressives.

“I think there will be soul-searching tomorrow among the minority communities. They must ask themselves why they could not deliver a Chuy victory,” said Valerie Johnson, DePaul University political science department chair.

But Johnson said she also hopes Emanuel will do his own soul-searching.

“If he knows nothing else, he has to know that there is incredible dissatisfaction with his leadership,” Johnson said.