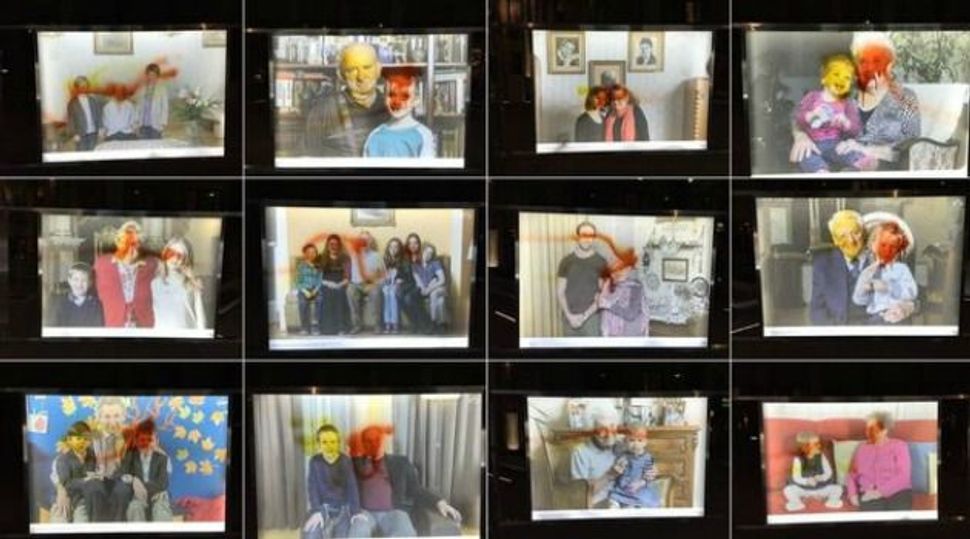 Vandals in Budapest defaced an exhibition about Holocaust survivors and, in a separate incident, painted a swastika opposite a synagogue.

The incident involving the exhibition was reported on Sunday by the Hungarian Jewish community’s watchdog on anti-Semitism, the Action and Protection Foundation, or TEV.

According to the report on TEV’s Facebook page, unknown individuals on Saturday splashed red paint on 14 portraits showing Holocaust survivors with the youngest members of their families.

The Unified Hungarian Jewish Congregation, or EMIH, set up the exhibition, comprising 24 portraits, near the Madach Theater in central Budapest to celebrate Hungarian Jewry’s continuity after the genocide that nearly wiped out the community.

Separately, TEV also reported that shortly before April 3, unknown individuals painted a swastika in front of a synagogue on Wesselenyi Street, located 5 miles northeast of Madach Theater. The Nazi symbol was removed shortly after its discovery, TEV wrote.

Both reports followed the April 1 release of TEV’s second annual monitor of anti-Semitic attitudes in Hungary, which showed a decrease in the prevalence of such beliefs.

In the survey, conducted late last year by the Median polling company, 31 percent of 1,200 respondents displayed what TEV defined as anti-Semitic views, compared to 38 percent in a similar survey conducted last year. The survey has a 3-percent standard error.