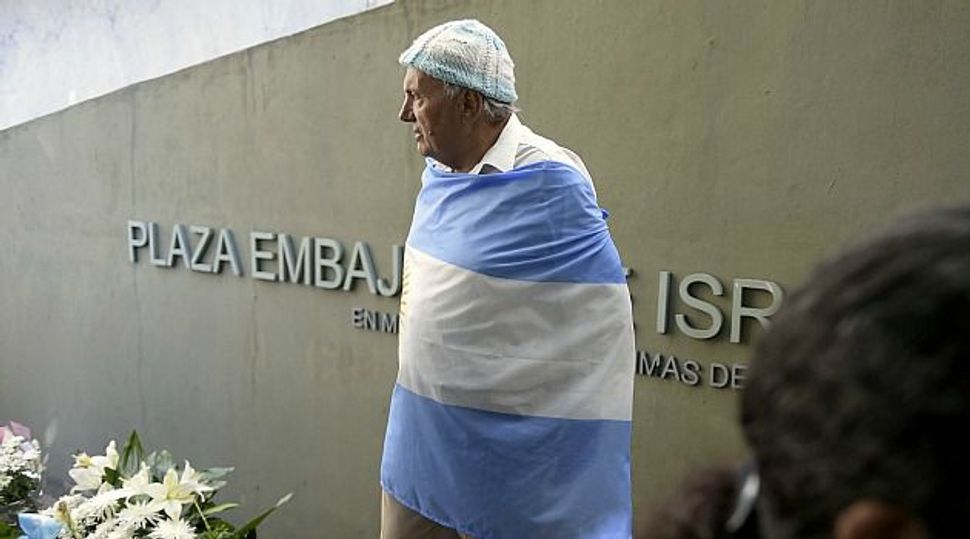 Argentine Jew takes part in vigil on the anniversary of the 1992 attack on the Israeli embassy that killed 29 people. Image by getty images

The Argentinian government will desclassify all intelligence documents about the March 17,1992 attack on the Israeli Embassy in Buenos Aires that killed 29 people and wounded hundreds.

The measure was announced Thursday on the government’s website for records of public proceedings, Official Gazette. The move is a response to a request made Wednesday by the National Supreme Court of Justice in a document signed by all four justices.

The High Court is in charge of the investigation because the attack occurred on a diplomatic mission. The ongoing Supreme Court investigation has found that the attack was perpetrated by Hezbollah.

Interest in the investigation has picked up since last month when Argentina’s President Christina Fernandez de Kirchner rebuked Israel for not working to bring the perpetrators of the 1992 bombing of its embassy in Buenos Aires to justice. Israel responded that it is Argentina’s responsibility to bring the bombers to justice.

In 1999, the court ordered the arrest of top Hezbollah operations office Imad Mughniyah, who was assassinated in 2008, in connection with the embassy attack.

Prime Minister Benjamin Netanyahu mentioned the two bombings in Buenos Aires last month during his address to a joint meeting of the U.S. Congress, when he said that Iran “blew up the Jewish community center and the Israeli embassy in Buenos Aires.”