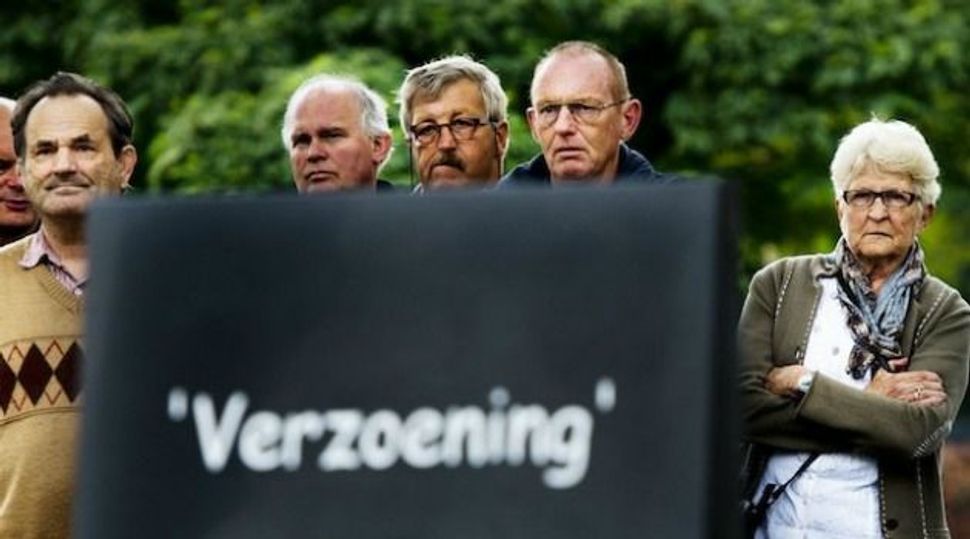 Dutch Jews protested the commemoration of a soldier who fought for Adolf Hitler on a monument bearing names of Holocaust victims.

The Federative Jewish Netherlands, or FJN, called the inclusion of the soldier’s name to the monument in the town of Geffen, located 60 miles southeast of Amsterdam, “both shocking and cowardly,” the Eindhovens Dagblad reported last week.

In 2012, then-Geffen Mayor Roel Augusteijn announced the scrapping of a controversial plan to unveil a monument bearing the names of German soldiers who died fighting for Nazi Germany, along with Holocaust victims and Allied soldiers.

Hotly contested by Jewish organizations including FJN, the so-called Reconciliation Monument’s original intention had become too controversial to be realized, Augusteijn said. Instead, a monument with no names was unveiled.

But since then, the monument was redesigned to include one headstone carrying the names of Jewish Holocaust victims, and another headstone bearing the name of a local man who died while fighting for Germany’s Wehrmacht under Adolf Hitler, the Eindhovens Dagblad reported.

The additional headstones were placed in December with no media coverage and FJN was informed about it earlier this month.

“There can be no reconciliation between perpetrators and victims,” FJN Chair Herman Loonstein told the local daily. “Certainly not in one stroke, as was done here with the placing of two adjacent stones.” A member of the local historical society defended the move, saying “the names of all victims from the village are listed together” on previously-erected monuments.

The Geffen controversy comes amid a polarizing debate in the Netherlands about commemoration of World War II fatalities. In 2012, the national commemoration committee of the Netherlands scrapped a poem from its main annual ceremony because it was seen to suggest that Nazis deserved to be commemorated along with their victims. The poem was written by a high school student to his late great uncle, who died while fighting an SS officer.

Also that year, a Dutch court issued an injunction against the commemoration of German soldiers in the town of Vorden. The Center for Documentation and Information on Israel, which is the country’s leading watchdog on anti-Semitism, has called for official commemoration authorities to adopt clear criteria that exclude the commemoration of soldiers and other representatives of Nazi Germany or its allies in ceremonies in memory of people who died during or because of World War II.