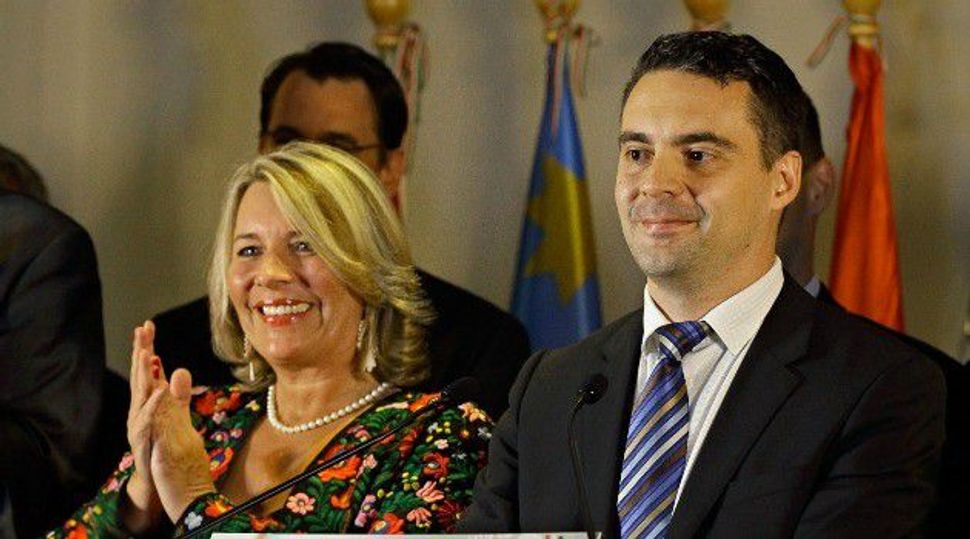 (Reuters) — Hungary’s Jobbik party will leave behind its far-right origins, keep the country in the European Union and come to terms with foreign investors as it sets its sights on government, its leader said on Tuesday.

Jobbik, condemned throughout Europe as anti-Semitic and racist, is now the strongest opposition party in opinion polls and on Sunday won its first parliamentary seat in a first-past-the-post contest, an important electoral milestone.

Unveiling what would amount to major policy shifts for the first time, Jobbik leader Gabor Vona drew parallels between his approach and a drive by Marine Le Pen, leader of France’s National Front, to ditch her party’s hardline image and appeal to people fed up with the traditionally dominant parties.

“Politics will change; how exactly nobody knows,” Vona, who is 36, told Reuters in his spartan office in the Hungarian parliament building, overlooking the Danube river.

“Like Syriza in Greece, Podemos in Spain or National Front in France, Jobbik in Hungary is knocking on the door of government. These parties are new in ways we are only beginning to grasp,” he said in the interview.

Hungary’s next parliamentary election is in 2018. The last time a far-right party was in government in an EU state was in 2000, when Austria’s Freedom Party joined a coalition government. The rest of the bloc isolated Vienna in response.

Jobbik’s critics say its attempt to recast itself as a mainstream party is a sham, designed only to win votes. They point to people within the party who have made anti-Semitic statements, but have not been thrown out.

A Jobbik member of parliament who in 2011 spat on a Holocaust memorial and called the Nazi genocide a lie but kept his job after issuing an apology.

Jobbik denies it is anti-Semitic or racist. In the interview, Vona said Jobbik would break with its extremist past even in the face of resistance within his party. “I am much more consistent now about the wild offshoots that I used to allow, look away from, or sweep under the carpet,” he said.

“The responsibility that flows our way from Hungary’s voters demands we do that. … With time the (extremist) elements of Jobbik you may see as prevalent will fade out because they no longer find their calling here.”

On the EU, Vona said that a Jobbik government would not try to leave the bloc, though it would try to reform Hungary’s relationship with Brussels. Previously the party has said it would seek to reopen Hungary’s accession treaty and even hold a referendum on an exit from the EU.

“There is no gut rejection of the EU in us…. Easing the resentment toward European integration would be Jobbik’s success. People don’t hate the EU because of me but because of the experience they have had,” said Vona.

He said he would challenge EU rules so that Hungary can protect some sectors of its economy from competition, especially food producers.

A 2012 incident when Jobbik’s deputy chairman Elod Novak burned an EU flag at a protest was “an emotional reaction… justifiable in that situation,” Vona said. But he said the incident would not be repeated.

On tax policy, Vona softened Jobbik’s previous stance blaming foreign multinationals for many of Hungary’s problems. He said he would keep windfall taxes imposed under the center-right government in power now, which have hurt many multinationals.

But he said: “We need to find the middle ground where multinationals and banks share in our burdens without hurting their prosperity or their mission … Clearly we do not want to expel multinational capital from Hungary.”

Vona said Hungary’s foreign debt under a Jobbik government would not be restructured unilaterally. Instead Jobbik would see whether creditors would be open to the idea, and would seek new lenders, including in places like Russia or the Middle East.

Jobbik has cordial ties with ruling circles in Iran, Russia, and Turkey, prompting allegations the party is receiving financial support from them.

Vona denied that. He said it was in Hungary’s interest to be friendly with Moscow while Iran was “a very important nation of the world.”