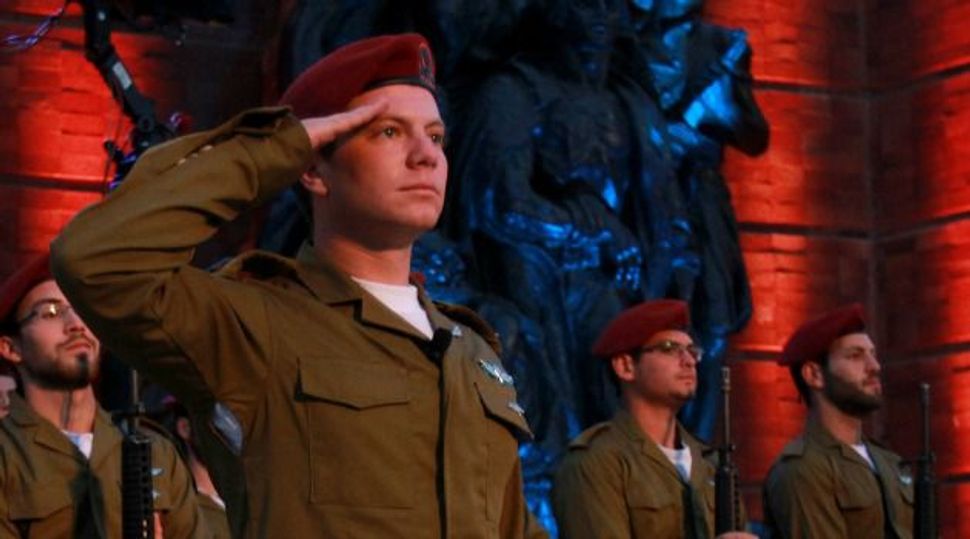 “Today, 70 years after the liberation of the death camps, we stand before you, and we swear an oath and promise, ‘All of us, each and every one of us, have a number tattooed on their arm,’” Rivlin said in an emotional address Wednesday evening at Yad Vashem in Jerusalem marking the beginning of the 24-hour remembrance. “Yet, at the same time and in the same breath we remember: We came from Auschwitz, not because of Auschwitz. We cannot let the pogroms, the bellowing smoke of the crematoria blind us or blur our abilities to recognize our past, our identity, our heritage — which are stronger than those who with destroy us.”

The ceremony was broadcast on all Israeli television channels and on several radio stations. On Yom Hashoah in Israel, places of entertainment are closed and Holocaust themed-movies and documentaries are shown on television channels.

Following a two-minute siren on Thursday morning, when Israelis traditionally stop what they are doing to reflect on the tragedy, a national wreath-laying ceremony will be held at Warsaw Ghetto Square in Yad Vashem, and the names of Holocaust victims will be read out over the following hours.

During the ceremony, six Holocaust survivors told their stories in a prerecorded video before they lit the six torches representing the six million Jews killed during the Holocaust. The videos are available for viewing on the Yad Vashem website.

Israeli Prime Minister Benjamin Netanyahu, who used his address to criticize the framework agreement signed earlier this month with Iran, compared the Islamic Republic to the Nazis.

“Just as the Nazis hoped to crush a civilization, so Iran strives to take over the region and from there spread onwards, with the stated intention of destroying the Jewish state,” Netanyahu said, “The bad deal that is being worked out with Iran shows that the historical lesson was not internalized. While the civilized world sinks into a coma on a bed of illusions, Iran’s rulers encourage subversion and terrorism, they spread destruction and death. The world powers shut their eyes to the masses in Tehran calling ‘Death to America, death to Israel’.”

International Holocaust Remembrance Day is marked worldwide on Jan. 27, the date of the liberation of the Auschwitz death camp. Israel’s annual Holocaust memorial day coincides with the Hebrew date of the Warsaw Ghetto uprising.