Samantha Power Won’t Promise To Back Israel at United Nations 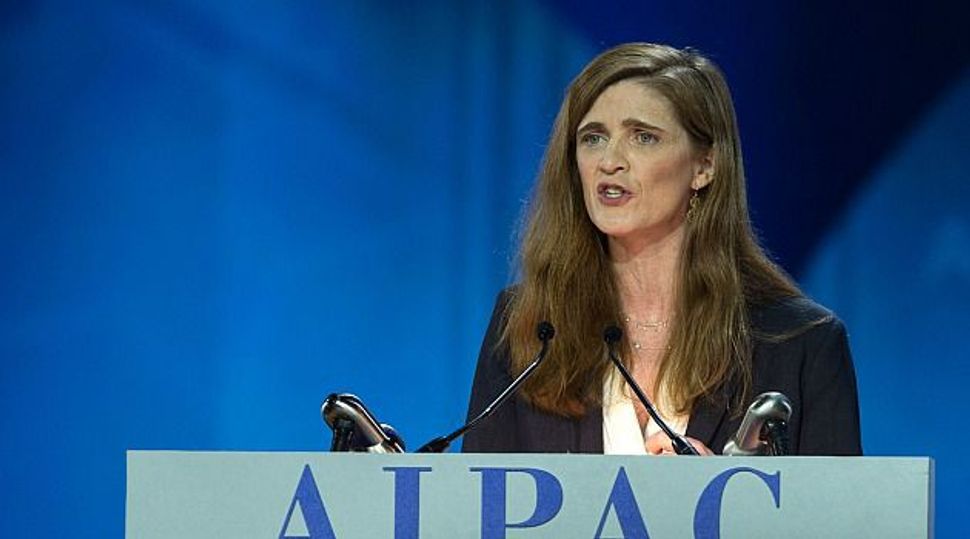 The United States would continue to “work closely” with Israel at the United Nations but would not count out advancing resolutions targeting Israel, Samantha Power said.

Power, the U.S. envoy to the international body, testified Wednesday before the foreign operations subcommittee of the Appropriations Committee of the U.S. House of Representatives.

Rep. Nita Lowey (D-N.Y.), the top Democrat on the committee and the subcommittee, told Power she was troubled by reports “suggesting a reevaluation of our long-standing policy of defending Israel at the U.N.” and said “supporting or remaining agnostic” on U.N. resolutions targeting Israel would violate the 1993 Oslo peace accords.

Also worried about reports that the United States may allow such resolutions to go forward was the chairwoman of the subcommittee, Rep. Kay Granger (R-Texas).

“I am also very concerned about recent statements from administration officials that suggest the United States is re-evaluating its approach to the peace process and reports that the U.S. may support a U.N. Security Council resolution laying out conditions and establishing deadlines,” Granger said.

Power said the United States would continue to stand with Israel “when it matters.”

“We will continue to work extremely closely with Israel in New York,” Power replied. “As you know well we have a record of standing when it matters with Israel.”

However, Power would not count out advancing U.N. resolutions regarding the Israeli-Palestinian conflict. She noted that the United States had as recently as last summer’s war between Israel and Hamas contemplated advancing a U.N. Security Council resolution on the conflict.

Power repeated an Obama administration talking point, that the “reevaluation” comes in the wake of mixed signals from Israel and the Palestinians regarding their commitment to a two-state solution.

“Our objective as an administration is what can we do to defuse tensions, what will it take to get those negotiations back on track,” she said.

U.S. policy has for decades been to mostly block Israel-critical resolutions, although successive administrations have on occasion allowed resolutions targeting Israel for condemnation to advance.

Samantha Power Won’t Promise To Back Israel at United Nations