Dieudonne Banned From Performing in Morocco 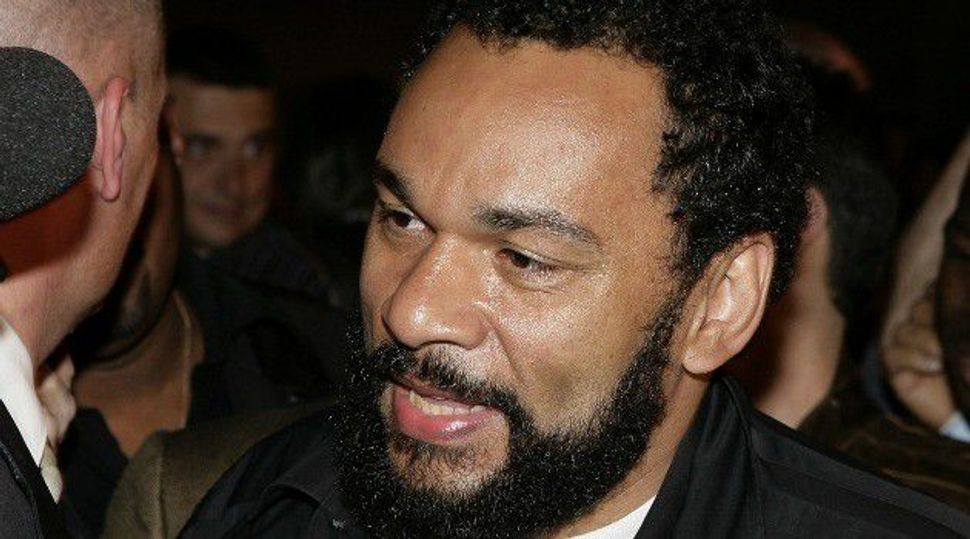 The French comedian Dieudonne M’bala M’bala, who has faced repeated charges of incitement of hatred toward Jews, was banned from performing in Morocco.

Dieudonne was slated to perform on April 29 in Casblanca but organizers had to cancel because authorities withheld their permission for the show, Le Figaro reported Thursday, citing Moroccan media.

The show was scheduled to take place at an event hall named after the late King Mohammed V of Morocco.

A venue named for the late king, who was close to his country’s Jewish community, may have contributed to the sensitivity of local authorities.

Dieudonne has been the subject of multiple police investigations and executive bans against his shows in France for their anti-Semitic content. He has more than 10 convictions for inciting racial hate against Jews.

Moroccan officials offered no explanation for withholding permission for the performance.

Envoys of King Mohammed VI of Morocco have often touted the kingdom’s expenditure of millions of dollars on restoring Jewish heritage sites as an example of its policy of religious tolerance.

Dieudonne is the inventor of the quenelle, a quasi-Nazi salute which French Prime Minister Manuel Valls has called an anti-Semitic gesture of hate.

He also coined the term “shoananas”, a mashup of the French word for pineapple and the Hebrew word for Holocaust, which mocks the genocide without explicitly violating French laws against such denials.

Dieudonne’s current show, titled “The Impure Beast,” contains profanities connected to Ilan Halimi, a young Parisian Jewish phone salesman who was tortured and murdered in 2006 by a gang of kidnappers who targeted him because he was Jewish.

“If I knock down a Jewish journalist, it will be a serious thing,” Dieodonne said on stage. “They will reopen the Nuremberg trials. They will even exhume Ilan Halimi. They’re going to find my DNA in his asshole.”

Dieudonne Banned From Performing in Morocco