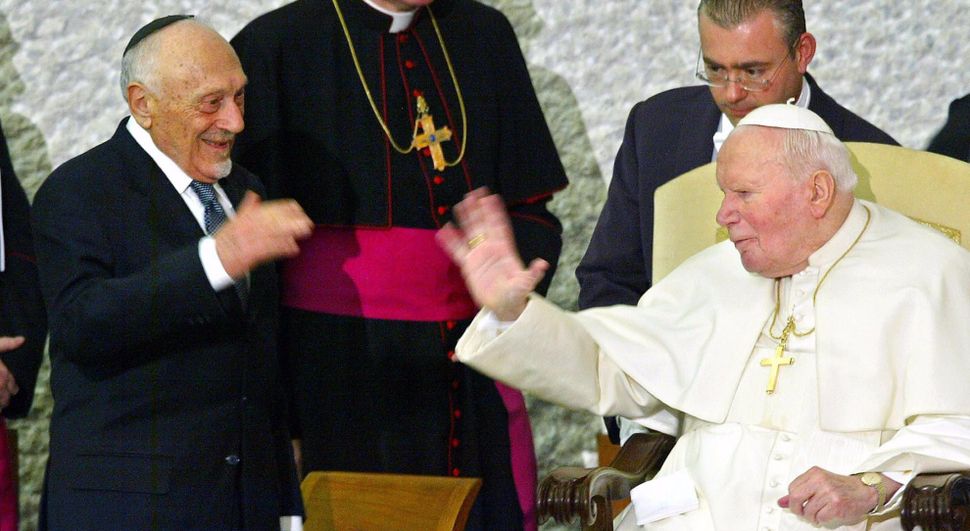 (Reuters) — Elio Toaff, the chief rabbi of Rome for half a century and a pivotal player in Christian-Jewish reconciliation, has died at the age of 99.

Toaff, who a spokesman said died on Sunday night, was Rome’s chief rabbi in 1986 when then-Pope John Paul II made the first visit by a Roman Catholic pontiff to a synagogue in nearly 2,000 years.

“We gratefully remember this man of peace and dialog who received Pope John Paul II during his historic visit to the Great Synagogue of Rome,” Pope Francis told a visiting Jewish delegation at the Vatican on Monday.

It was during that visit to Rome’s temple that John Paul made the now-famous remark calling Jews “our beloved elder brothers,” marking a milestone in Catholic-Jewish relations.

Several years later, John Paul led the Vatican to diplomatic relations with Israel and during a visit to Jerusalem’s Western Wall in 2000 he asked for forgiveness for Catholics who persecuted Jews over the centuries.

Toaff, who retired in 2001, used part of the pope’s phrase in the synagogue for the title of his autobiography “Perfidious Jews, Elder Brothers,” which spoke of the revolutionary improvement in Catholic-Jewish relations.

The first part of the title came from a Good Friday prayer that Catholics recited for centuries until the 1960s, when the Church officially repudiated the concept of collective Jewish guilt for the death of Jesus.

“He dedicated his life to the cause of inter-religious dialog,” said Rome Mayor Ignazio Marino.

Toaff, who was born in the Tuscan city of Livorno in 1915, opposed the fascist regime of dictator Benito Mussolini and was in the resistance to Nazi occupiers during World War Two.

Captured by the Nazis, he was sentenced to death by firing squad and forced to dig his own grave, but managed to escape.

After the war, Toaff, who would have turned 100 on April 30, served as rabbi of Venice and taught at its university.