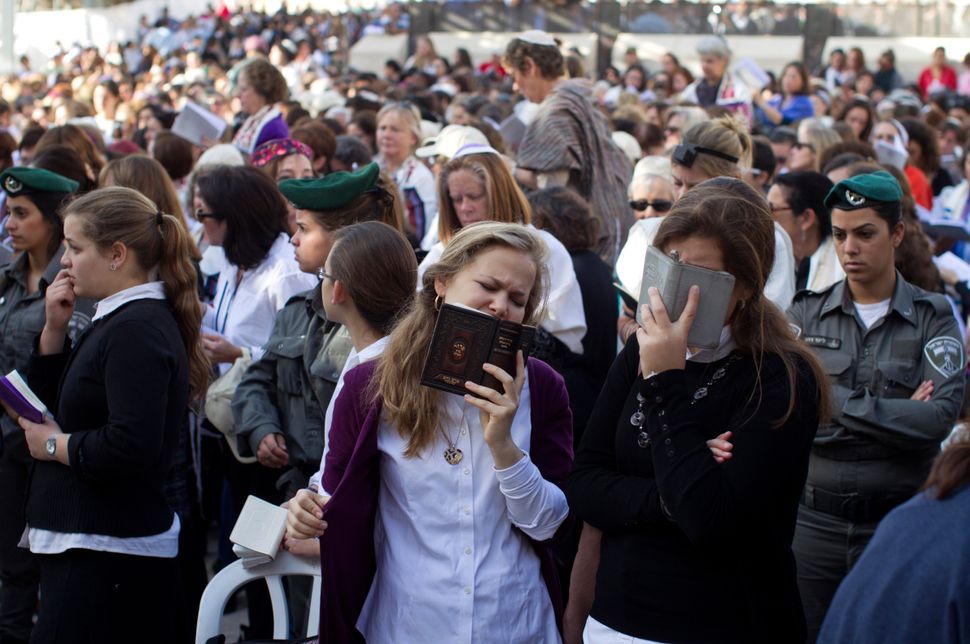 Women of the Wall read from a full-size Torah scroll during the group’s monthly prayer service at the Western Wall.

The Torah scroll, one of 100 available for public use on the men’s side of the Western Wall, was passed across the barrier between the men and women’s sections by male supporters of the 26-year-old organization on Sunday during services for the new month of Iyar.

Regulations at the site set by the office of the Rabbi of the Western Wall and the Holy Sites of Israel, headed by Rabbi Shmuel Rabinovitch, have prevented women from using a Torah scroll in their section.

An April 2013 Supreme Court ruling acknowledged women’s right to pray according to their belief at the Western Wall, claiming that this does not violate what has come to be known as “local custom.”

Haredi Orthodox men praying at the Wall physically attacked the men who helped the women, with what the group described in a statement as their “carefully planned help,” obtain the Torah scroll, according to the Women of the Wall, and then broke through the mechitzah barrier and attempted to take the scroll away from the women.

Police reportedly removed the men and the women completed what the organization said in a statement was “a full and deeply moving service.”

In October, the women smuggled a miniature Torah scroll into the women’s section, despite their bags being searched, and held a bat mitzvah using the 200-year-old Torah which was brought from Britain for the prayer service.

Women of the Wall gather at the Western Wall at the start of each Jewish month for the Morning Prayer service. The group’s members have clashed frequently with staff from Rabinovitch’s office and with police for holding services that violate the rules enforced by that office, including singing, wearing prayer shawls and other customs that are forbidden to women under the office’s interpretation of Orthodox Jewish law.