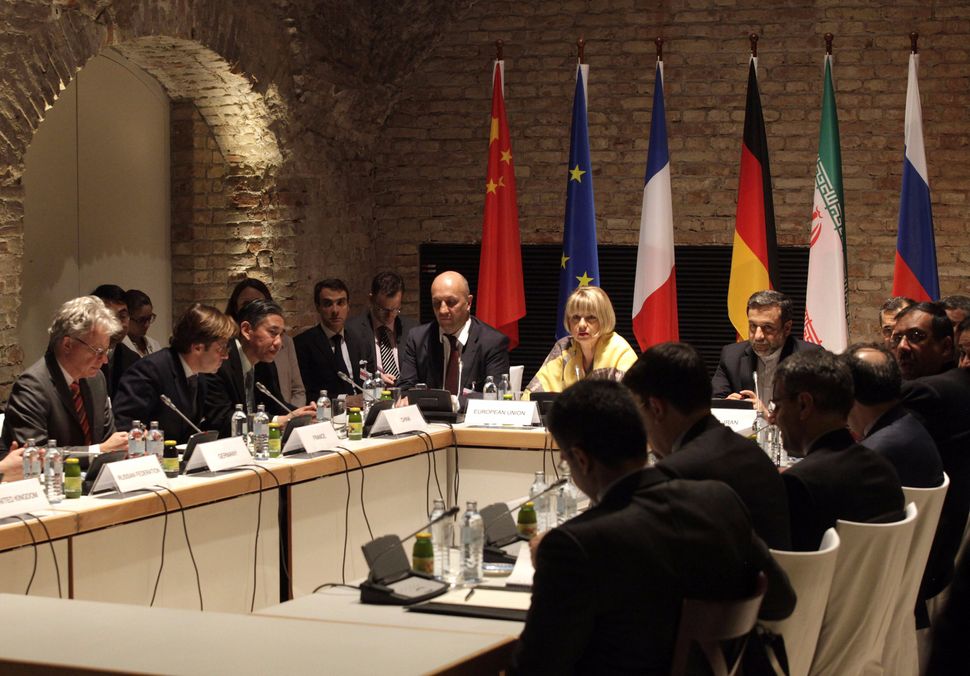 Representatives meet in Vienna to attempt to reach an agreement over Iran’s nuclear program. Image by Getty Images

Israel will take part as an observer in a major nuclear non-proliferation conference that opens at the United Nations on Monday, ending a 20-year absence in hope of fostering dialog with Arab states, a senior Israeli official said.

Assumed to have the Middle East’s sole nuclear arsenal, and having never joined the nuclear Non-Proliferation Treaty, Israel has stayed away from gatherings of NPT signatories since 1995 in protest at resolutions it regarded as biased against it.

Citing the example of disarmament talks in other regions, Israel says it would consider submitting to international nuclear inspections and controls only once at peace with the Arabs and Iran. Those countries want Israel curbed first.

Israel deems Iran its top threat. The Islamic Republic has said it seeks only nuclear energy, not bombs, from uranium enrichment. Six global powers are negotiating a comprehensive nuclear deal with Iran – a process Israel has denounced, fearing it will not restrain Tehran’s atomic activities sufficiently.

“We think that this is the time for all moderate countries to sit and discuss the problems that everyone is facing in the region,” the Israeli official, who requested anonymity given the sensitivity of the subject, told Reuters on Sunday.

“I see this, coming as an observer to the conference now, as trying to demonstrate our good faith in terms of having such a conversation. We need direct negotiations between the regional parties, a regional security conversation, a conversation based on consensus. This (attendance at the NPT conference) is meant not to change our policy. It’s meant to emphasize our policy.”

The question of sequencing — if peace should precede disarmament — has helped mire negotiations on the creation of a Middle East free of weapons of mass destruction. An Egyptian plan for an international meeting laying the groundwork for such a deal was agreed at the last NPT review conference, in 2010.

The Israeli official doubted the deadlock would be resolved at the pending NPT conference – anticipating, instead, an “Arab proposal that would not adopt the position of direct engagement” with Israel.

Still, the official described the NPT conference as a chance to build on opposition Israel shared with some Arabs to the April 2 outline nuclear deal between world powers and Iran.

The conference “doesn’t contradict a broader possible outreach,” the official said. Without naming specific countries, the official said some Arabs appeared less attentive to Israel’s non-NPT status as they were “too busy with bigger problems.”

Among these might be Egypt, which had long been vocally opposed to Israel’s nuclear opacity but has recently closed ranks with its neighbor against common Islamist adversaries.

“Our initiative for a Middle East free of non-conventional weapons is a principle. It will not change. But nothing is against Israel itself. It’s for everyone – Iran, Israel, everyone,” an Egyptian official said on condition on anonymity.