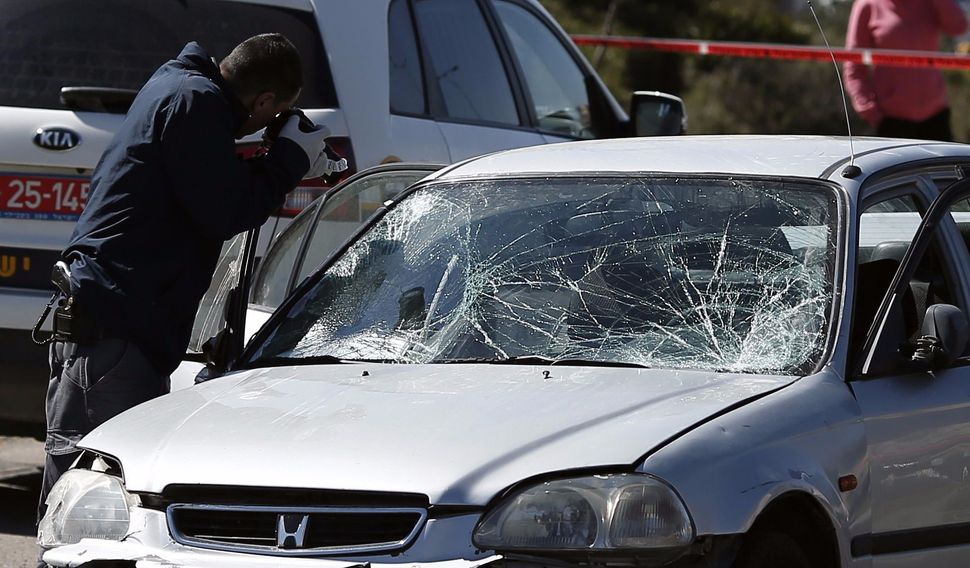 Israeli forensic police inspect a car that ploughed into pedestrians in Jerusalem injuring several people during a similar attack in March 2015. Image by Getty Images

A Palestinian man from eastern Jerusalem has been arrested in connection with a car ramming attack that injured four Israeli police officers.

The police officers were injured Saturday night when a car deliberately ran into them while they were standing by a road near A-Tur, the eastern Jerusalem neighborhood near the Mount of Olives where rioting took place during the day. The rioting was in response to the death of a Palestinian teen who was killed after allegedly attempting to stab a Border Police officer at a checkpoint near the West Bank town of Ma’ale Adumim, outside of Jerusalem.

The suspect is about 30 years old, from the Shuafat refugee camp in the West Bank near Jerusalem. He was arrested Sunday morning after an all night search by Israeli troops and police, according to police. The vehicle used in the attack was found abandoned during the search.

Emergency vehicles and paramedics were pelted with rocks and firebombs as they approached the scene following the attack, according to reports. Among the cars attacked was that of Jerusalem Mayor Nir Barkat, who joined emergency responders at the scene.

Also Saturday, a Palestinian attacker stabbed an Israeli Border Police officer five times in the stomach and head near the Cave of the Patriarchs in the West Bank city of Hebron, The attacker, in his 20s, was shot by a soldier during the attack. He died of his wounds in a Jerusalem.

Meanwhile, the woman who was hit in a car ramming attack at a bus stop in Jerusalem’s French Hill neighborhood on April 15, has regained consciousness and is breathing on her own, the Jerusalem Post reported.

Shira Klein also is speaking to her family, according to the report.

Shalom Sharki, 25, of Jerusalem, who was waiting for the bus with Klein, died of his injuries. The driver, a Palestinian man from eastern Jerusalem, admitted that the attack was deliberate.