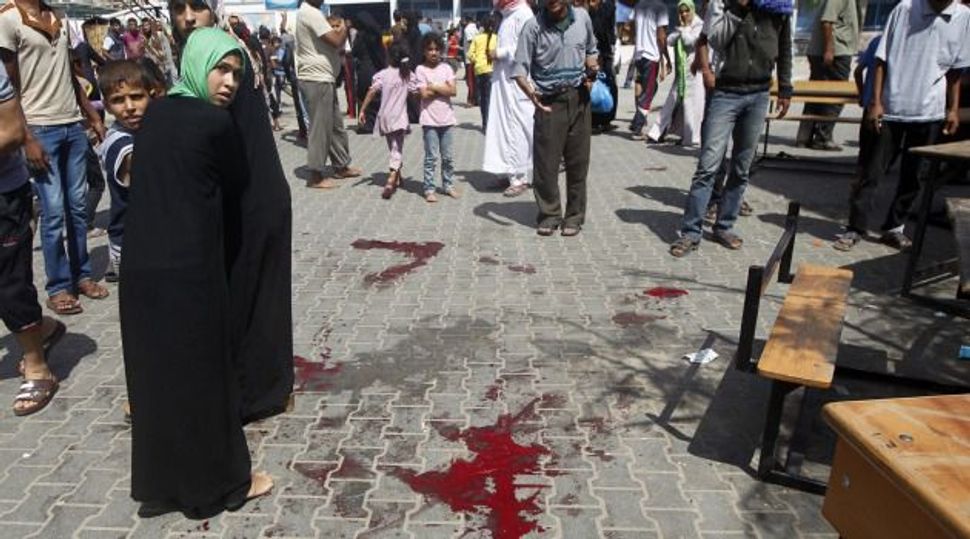 Rising Toll: Palestinians walk by trail of blood near desks as a Gaza school hit by Israeli shelling. Image by getty images

Israel fired on seven United Nations schools during the 2014 Gaza war, killing 44 Palestinians who had sought shelter at some sites, while Palestinian militants hid weapons and fired from several empty U.N. premises, a U.N. inquiry found.

“I deplore the fact that at least 44 Palestinians were killed as a result of Israeli actions and at least 227 injured at United Nations premises being used as emergency shelters,” U.N. Secretary-General Ban Ki-moon wrote in a cover letter accompanying a summary of the inquiry’s findings released on Monday.

“I am dismayed that Palestinian militant groups would put United Nations schools at risk by using them to hide their arms. The three schools at which weaponry was found were empty at the time and were not being used as shelters,” Ban wrote.

More than 2,100 Palestinians, most of them civilians, were killed during the Gaza conflict last July and August. Sixty-seven Israeli soldiers and six civilians in Israel were killed by rockets and attacks by Hamas and other militant groups.

Both Israel and Hamas, the Islamist group that dominates Gaza, said they would cooperate fully with the inquiry, launched by Ban in October.

The inquiry was headed by Patrick Cammaert, a retired Dutch general and former force commander of the U.N. peacekeeping mission in eastern Democratic Republic of the Congo.

Israel’s military in September opened five criminal investigations into its Gaza war operations, including attacks on some of the U.N. schools and an incident that killed four Palestinian children on a beach.

“United Nations premises are inviolable and should be places of safety, particularly in a situation of armed conflict,” Ban wrote. “I will work with all concerned and spare no effort to ensure that such incidents will never be repeated.”