What Happens at ‘Sheldon Adelson Primary’ Stays There 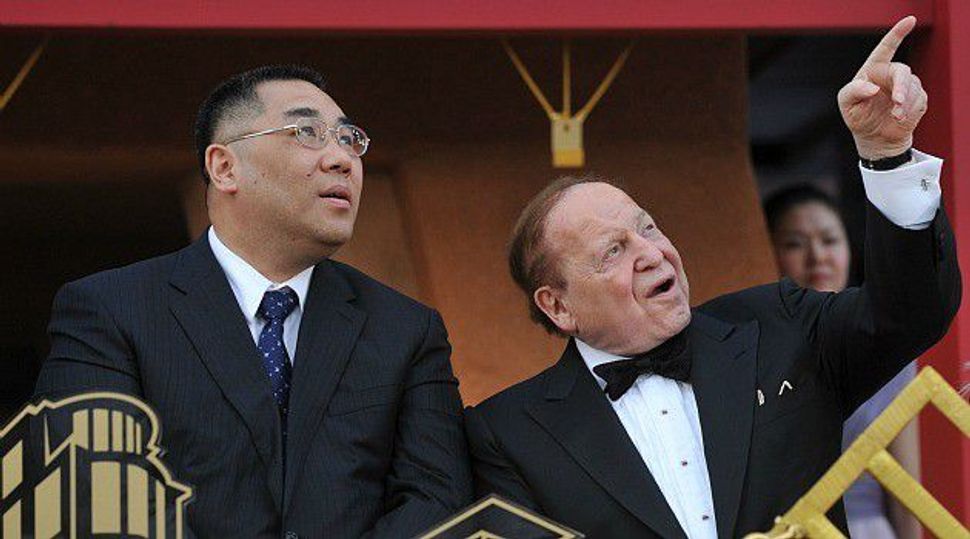 Sheldon Adelson was unseen and unheard from at a Las Vegas Republican gathering. But that doesn’t mean it wasn’t the ‘Sheldon primary.’ Image by Getty Images

Yes, it’s noisy. This is Vegas. The Venetian. The casino floor.

The bikinis, the brides-to-be, the blonde with the “I’m 21, bitches” T-shirt. The whoops, the hissing, the groans, the bells.

This is Las Vegas, where Sheldon Adelson, who owns the Venetian, is the unanointed king. It’s also where the Republican Jewish Coalition, the organization over which his largesse looms like a beloved, beholden uncle, holds its annual national four-day convention, attracting hundreds of party loyalists, including politicians seeking his blessing.

The melding of politics, Jewishness and sin is confusing, and not just if you’re 85, like Kenneth Bialkin, a national Jewish leader and prominent New York City lawyer, or

“Kenny,” according to his RJC name tag.

Las Vegas is where people go to lose their names, which is why Bialkin stands out amid the slot machines on the casino floor: He’s diminutive, dapper and ramrod still. Kenny and Sandy, Mike, David and Sarah skirt a bachelorette party as they head out of the ballroom where Rep. Kevin McCarthy of California, the majority leader in the U.S. House of Representatives, and Rep. Ed Royce, also of California and the chairman of the House Foreign Affairs Committee, address 700-plus guests.

The name tags that identify reporters or some other species of predator are easily spotted, and conference-goers for the most part skitter away from me. If I’m lucky, my proffered pen and pad gets a “Shabbat Shalom” muttered under the din. Part of the RJC convention takes place on the Jewish Sabbath, though it hardly feels like Shabbat here.

Adelson is the one name that never gets lost in the wending, winding Venetian vortex. His staffers are alert to any interlopers; I’ve been turned away from the ballroom and retreated to an unpatrolled corridor between the convention center and the casino.

“Where is the hotel?” asks Bialkin, stopping and slipping into a discomfiting bewilderment.

I elicit a couple of anodyne quotes from Bialkin about the off-the-record gala Shabbat dinner he just attended (McCarthy was “excellent” and has a “great future,” Royce had “important” things to say about Iran) before gently pointing him toward the hotel elevators.

“Good night,” Bialkin says, shaking my hand with relief. So much for the unfiltered quote I was seeking.

There is more here for candidates and their fundraising proxies than just Adelson. The party had the Republican Jewish Coalition and a Jewish fundraising base before the casino magnate began to involve himself deeply in national politics in the late 1990s.

If you chat in dark corners with the donors in attendance, you’ll get the lay of the land: The largest number of longtime donors are lining up behind Jeb Bush, the former Florida governor. Among them are Mel Sembler, the Florida real estate magnate; Sam Fox, the former ambassador to Belgium; Fred Zeidman, the Houston lawyer; Ronald Krongold, the Miami investor; and Yitz Applebaum, the California venture capitalist.

Bush is the beneficiary of residual affection for his brother, the former president who wows the crowd at an off-the-record gala dinner Saturday evening. Many of these donors backed George W. and see Jeb as a path to redemption after a presidency roiled by the Iraq War and economic turmoil. At the dinner, George W. will not directly criticize President Barack Obama, but he decries the Iran talks, saying that sanctions rollbacks will not work.

Jeb is also the son of George H.W. Bush, and has listed as a foreign policy adviser his father’s secretary of state, James Baker, who had a contentious relationship with Israel and the pro-Israel community. Including Baker on a list of 21 advisers “created angst,” acknowledges Ari Fleischer, a former George W. Bush spokesman and an RJC board member who is one of the few people here designated for on-the-record quotation.

“It’s the kind of angst that comes and goes,” Fleischer says.

If it’s gone, it is in part because of a series of urgent calls to the candidate asking him to distance himself from the views of Baker, according to sources close to the candidate. Jeb Bush did so last week at a Manhattan party, saying he would seek the counsel of a younger generation, according to CNN.

Next in line competing for the donors are Wisconsin Gov. Scott Walker and Sen. Marco Rubio of Florida. Walker has the backing of Michael Epstein, a security tag magnate, and Marc Goldman, a Florida-based dabbler in entertainment and real estate. Rubio has as his campaign chairman Wayne Berman, a senior lobbyist at the Blackstone investors group, and as a principal funder Norman Braman, a South Florida car dealership magnate.

Neither Rubio, Walker nor Jeb Bush are here. They were in Las Vegas last year, and the RJC has asked them to give the conference a wide berth so other candidates may make their pitch to the assembled donors. One declared candidate appearing is Sen. Ted Cruz of Texas. Likely candidates on hand are Indiana Gov. Mike Pence and former Texas Gov. Rick Perry.

Adelson won’t announce yet whom he will support, according to insiders here, because he regrets how his influx of funds into Newt Gingrich’s ultimately quixotic run helped hobble Mitt Romney, who failed in his 2012 bid to oust Obama.

“Sheldon is all about Israel, but also all about winning,” one confidant says.

According to the confidant, Adelson wants to give the candidates room to compete.

“Sheldon knows that once he announces, his $100 million will end the race,” the confidant says.

You can’t avoid Adelson, even if he is not present, because the Venetian is his imagined world: the gondoliers, the canal, the oppressive perpetual muted sunset over “St. Mark’s Square,” where you can be serenaded.

It’s an inevitability that Democrats gleefully point out.

“This is a cattle call. This is outreach to a single donor, Sheldon Adelson,” Rep. Debbie Wasserman Schultz, the chairwoman of the Democratic National Committee, says in a conference call for reporters attending the event. “This should not be mistaken for genuine outreach to the Jewish community.”

Matt Brooks, the RJC’s director, clearly is tired of the Sheldon question.

“Who?” he asks each time a reporter presses him about the “Sheldon primary.” Then he grins and laughs, aware of the absurdity of denying Sheldon in the palace of Sheldon.

And so, during the gathering’s lone on-the-record session, a three-hour event on Saturday morning, Cruz, Pence and Perry duly thank the Adelsons for their hospitality. The candidates then set about wooing Jewish donors.

Cruz, whom insiders say faces skepticism from Republican Jews for his hard line on issues like immigration and his perceived obstructionism in Congress, raised $4 million in his first week as a candidate — more than any other candidate in history. Still, he laments, “they describe me as a wild-eyed lunatic with dynamite strapped around my chest” — an odd locution in a roomful of Israel supporters. Cruz then points out his Jewish point man, Nicolas Muzin, at the other end of the room.

Perry leaps about the podium sporting spectacles and waving his hands. He starts talking about Tu b’Shvat, the Jewish arbor day, and a tree that grew outside the Theresienstadt concentration camp. He pronounces Tu b’Shvat perfectly and concludes, “As I look across this crowd, I see many descendants of this tree of life.” The crowd applauds hesitantly, wondering if this is where he wraps up.

Pence aces it on foreign policy, recalling his pre-gubernatorial career in Congress as a leading Israel backer. But he, too, has issues: Brooks opens up questions by noting that there are a “lot of questions” in the room about whether a recently passed religious freedom law in his home state restricts gay rights. Pence’s tone is apologetic.

“Ultimately we adopted a few reforms and made it clear this was a shield, not a sword,” he says.

Afterwards, Brooks acknowledges that he was seeking clarity from Pence on an issue that could alienate moderates.

“There’s no question for us as a party: How do we do better at attracting women and minorities?” the RJC chief says.

For the Jewish community, where Republicans rarely have garnered more than a third of the vote, the key is to focus on Israel, Fleischer says.

“There’s a palpable hunger to hear good things about Israel, and we’re not hearing it from the White House,” he says.

What Happens at ‘Sheldon Adelson Primary’ Stays There