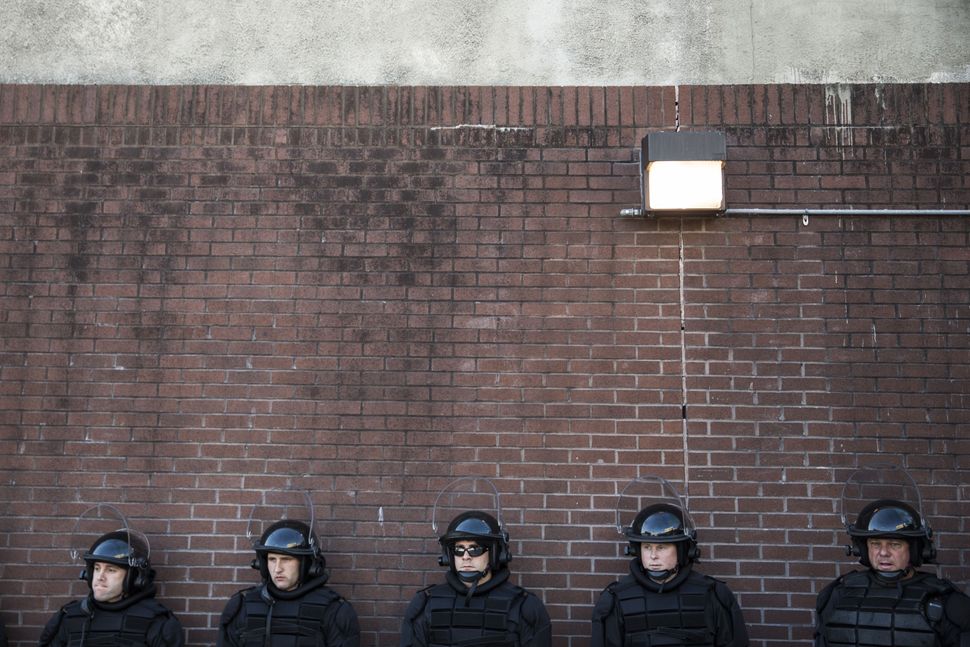 (JTA) — Not even a shard of glass was visible on the sidewalk outside 311 N. Exeter St. in downtown Baltimore on Wednesday afternoon, no sign of the havoc that struck two nights earlier, when rioters had their way here just as in other parts of this city.

But across the doorway and in the three-story brick building that houses Sports Mart, evidence of the looters lay everywhere: trampled cardboard boxes, plastic hangers on the floor and a sea of empty red Nike boxes sitting atop debris as far as the eye could see.

A human tornado blew through this sports apparel store on Monday night, carrying away $1 million in sneakers, work boots, jackets, shirts, sweats, caps – nearly all the merchandise in a business that Leon Levy, now 89, started in 1980 with his sons Harvey, Marc and Brian.

It was one of dozens of businesses that were looted amid violent riots in Baltimore that left 15 buildings and 144 vehicles aflame. This week’s unrest followed the funeral for Freddie Gray, a 25-year-old black man who died under questionable circumstances while in police custody on April 19. When peaceful protests gave way to violence, many locals said the chaos reflected pent-up frustration with Baltimore’s police and a sense that city government had neglected its poorest neighborhoods.

Nearly all of Monday’s rioting occurred west of Sports Mart, beyond Highway 83, which vertically splits this area of downtown. North Exeter Street is only one block long and seems isolated, with little foot or vehicular traffic even in the daytime. Next door is a dog-care business. Across the street is an organization that assists military veterans. A mall around the corner closed years ago.

But the store did not escape unscathed, and now, instead of serving their overwhelmingly African-American clientele, the Levys are dealing with insurance adjusters and wondering when they’ll be able to reopen.

The business long has enjoyed a loyal customer base, providing the family with what Marc Levy, 63, called “a very good living.” He lives in predominantly white Eldersburg, a suburb with few Jews. Harvey resides in Pikesville, not far from where, in 2010, two members of a Jewish volunteer patrol group were charged with assaulting a black teenager walking in their neighborhood; one of the defendants was convicted on two charges.

In the two days since the looting, many African-American customers and neighborhood residents have reached out to the Levys with sympathy and offers of help.

They included Jeff Alston, a 45-year-old truck driver who doesn’t live in the neighborhood anymore but has shopped at Sports Mart since he was 10, when the store first opened and his father, Joseph, began bringing him in to buy tennis shoes, basketball sneakers and T-shirts.

Now, out of loyalty, Alston regularly buys work boots and paraphernalia related to the Ravens football team here to mail to his son, Mar’kee, 21, a chef in Orlando, Fla. When he saw TV reports of the store’s destruction, “I was upset,” Alston said.

He says he appreciates the personal service the Levys provide, the fact that they greet regular customers by name and donate items to amateur athletic teams in the neighborhood. The Levys are friends of his, Alston said, so he’s prepared to help however he can.

On the plus side, there was no vandalism at the 20,000-square-foot store, so cleaning up and restocking are all that are needed to reopen, Marc Levy said.

The business won’t relocate, he said; the Levys own the building, which previously served solely as a warehouse.

Levy says he is furious that the police didn’t respond to any of the brothers’ continuous telephone calls pleading for help Monday night and into Tuesday morning as the looting was taking place. He and his brothers watched the scene unfold in real time on their cellular phones from feeds from video monitors in the store.

“It’s 100 percent the mayor’s fault,” Levy said of Stephanie Rawlings-Blake, accusing her of minimizing concern for property damage as it was occurring.

It’s not the first time the shop in East Baltimore, a mile east of the Inner Harbor, has been broken into. Levy pointed to a now cinderblock-filled opening where thieves entered in 1983 and to the ceiling where others broke in during a 1989 blizzard. There have been armed robberies twice here and multiple times in Sports Mart’s three other, now-closed locations elsewhere in the city. During one robbery, the Levys were tied up.

But this attack was different, the Levys said.

Standing at the cashier’s counter, behind which six racks full of professional teams’ caps were looted, Levy says he wonders how he’ll view the customers standing at this spot and paying for merchandise once the shop reopens.

“The hardest thing for me is looking at these people and thinking, ‘Are these the ones who took advantage?’ It’s hard,” he said. “I’m nice to everybody. I don’t care what you do for a living. I’ll call you sir. I’ll treat you with respect.”

It’s a sentiment his customers reciprocate.

Ten minutes later, as he stood atop some detritus near the front door, Levy listened to several phone messages of support.

“I’m so sorry. It broke my heart. It’s freakin’ crazy. If there’s anything you need from me, don’t hesitate,” came a message from an Israeli friend named Yaron. “I’m a concerned citizen, and I heard something happened at your store,” said Joanne Page, who later told JTA that she’s never shopped there. “I want to know if you needed any help in getting your store back together. I’m not asking to be paid for it.”

Venus Carrothers, who lives seven blocks away and has rewarded her grandson for good grades and for his job at a local hospital by buying him sneakers at the store, also left a message.

“To see people running into the store and stealing, it was senseless,” she said in an interview, referring to watching the security footage, which was broadcast locally. “What is the purpose? It had nothing to do with Freddie Gray.

“I would like to volunteer my time and clean up the store. It took [away] a lot from the whole community because where are we going to go now? For him to lose $1 million worth of merchandise – it’s crazy, it’s crazy, it’s crazy. He’s suffering and we’re suffering. It’s a no-win situation. Hopefully he’ll reopen his store and it won’t happen again.”