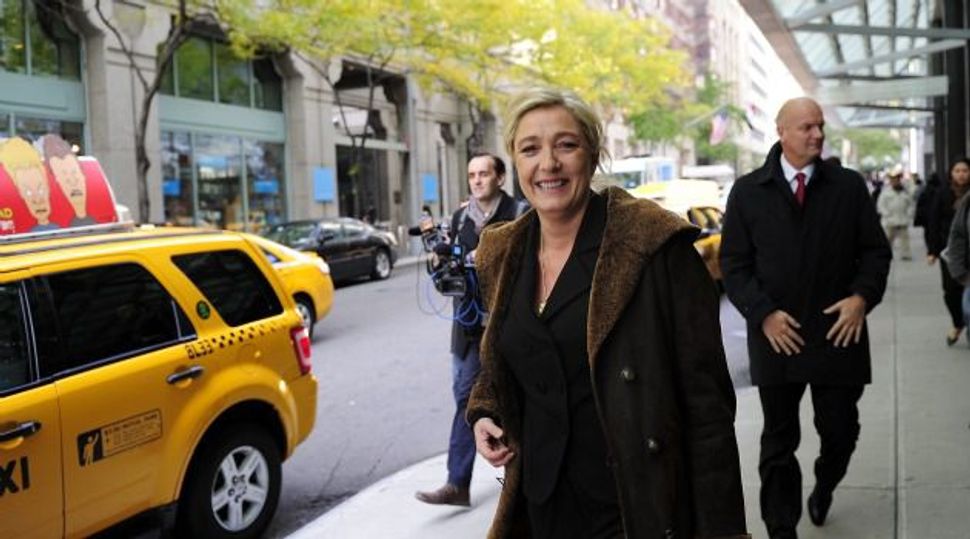 Madame No Name: Marine Le Pen, leader of the far-right National Front party hasn?t received much attention on her trip to the U.S. Image by getty images

Marine Le Pen said on Sunday she no longer wanted her father to speak on behalf of the French far-right National Front party that he founded and she leads, a day before he may be sanctioned by the party for his comments about World War Two.

Jean-Marie Le Pen faces a party disciplinary hearing on Monday for repeating his view that Nazi gas chambers were a mere “detail” of the war and for defending Philippe Petain, the leader of the French war-time government that cooperated with Nazi Germany.

Asked how the 86-year-old former paratrooper should be punished, his daughter told French media it was up to the party’s executive office to decide. She also accused her father of malice towards her and the party.

“I have the feeling he can’t stand the fact that the National Front still continues to exist without him in charge,” Marine Le Pen told journalists from Europe 1 radio, iTele TV channel and Le Monde newspaper. “I regret that.”

On Friday, he unexpectedly took to the stage to cheers during her May Day speech to hundreds of National Front supporters in central Paris.

“I think he should no longer be able to speak in the name of the National Front,” Marine Le Pen said on the Grand Rendez-Vous show, broadcast on TV and radio.

“He could very well have been honorary chairman…he could have distanced himself, taken a step back. He doesn’t wish to do that, he is being provocative. I see his most recent acts as ill-will both towards the National Front and towards me.”

Since succeeding her father as party chief in 2011, Marine Le Pen has sought to rid the National Front of its anti-Semitic image and position it as an anti-immigrant, Eurosceptic force offering protectionist policies to shelter France from globalization.

This feud is the latest in a number of clashes between father and daughter. Marine Le Pen fell out with her father last June after he made a remark about a French Jewish singer that was denounced as anti-Semitic by French and European Jewish groups.

She was further angered when her father said she was wrong to have avoided alliances with other far-right parties as she attempted to form a political group in the European Parliament.

Opinion polls indicate Marine Le Pen is likely to make it to the second round of the 2017 presidential election but not to win. How she handles relations with her father are seen as one of the key factors in how her party fares.

Her father agreed last month to give up on seeking to stand for the party in regional elections but has insisted he will not quit politics altogether and will continue as a member of the European Parliament.