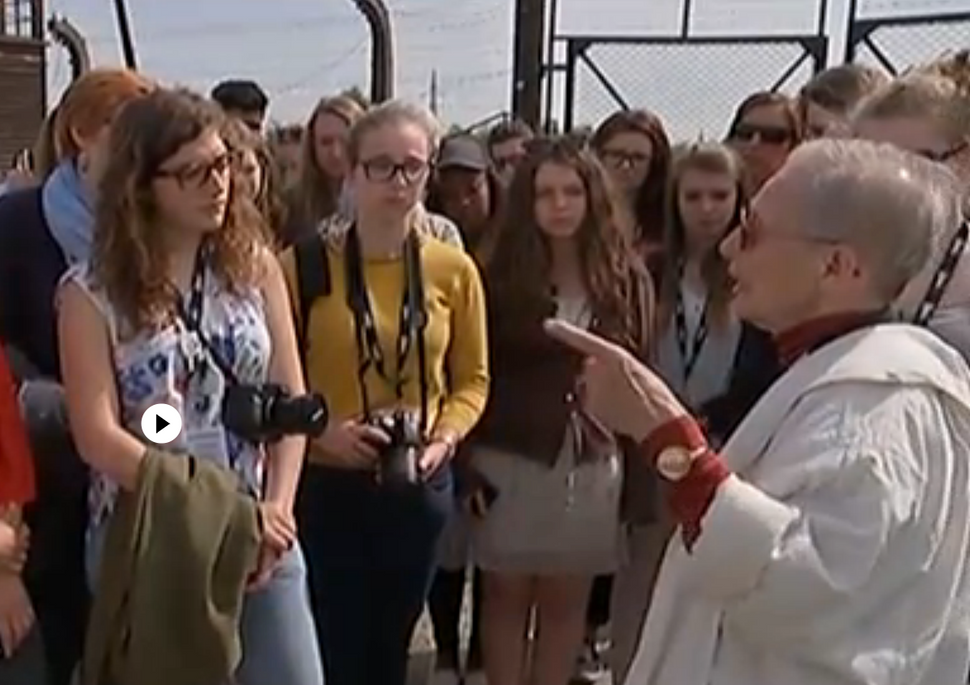 Belgian anti-racism groups condemned a public broadcaster’s airing of a video showing a guide at Auschwitz telling visiting youths that she is pro-Palestinian and anti-Semitic because of Israel.

The video was aired by the Flemish VRT network on May 8 as part of the program Terzake. It was about a trip organized by the “Trein der 1000” nongovernmental group for 1,000 teenagers from Belgium to the former Nazi death camp in Poland. The program is meant to teach adolescents about the Holocaust in order to educate them about the dangers of racism.

At the camp, the group’s Jewish guide, Lydia Chagoll, 84, is seen saying: “I am pro-Palestinian. I’m anti-Semitic.” Chagoll made the statement while talking to 18-year-old Fida’a Temraz, a Belgian high school student of Palestinian descent, and several other students.

Referencing Israel, Chagoll added: “I am an anti-Semite, because I think it is a scandal that cannot be permitted. It cannot happen.”

In a statement, the Flemish Forum of Jewish Organizations wrote that Chagoll’s statement about being anti-Semitic was probably sarcastic, but that because of her actions, “an activity meant to be educational turned into a disgusting and historically incorrect statement.”

Termaz said in an interview for VRT: “The situation now in Palestine, the occupation and the Holocaust, and Jewry, all is interconnected.” She added: “Hadn’t they [Jews] experienced it, I would have never come to Belgium, I would have been born and raised in Palestine.”

Chagoll, an artist and writer, spent World War II in the Far East, in a Japanese prisoner-of-war camp, after her Dutch parents fled Nazi-occupied Holland to what is today Indonesia, according to a biography of Chagoll offered by a publisher of one of her books.

But in Auschwitz, she described to the group how the smell of burning flesh at Auschwitz “penetrated everything, the wood and the walls, it’s something you can’t forget.” She also told the group that Jews were stripped naked and gunned down en masse at the camp – a claim disputed by Efraim Zuroff of the Simon Wiesenthal Center, who told JTA there were only sporadic shootings at Auschwitz.

Joel Rubinfeld, president of the Belgian League Against Anti-Semitism, told JTA “the trip meant to inoculate teens against anti-Semitism ended up possibly infecting them with it.” He added that his group was looking into initiating legal or disciplinary action against VRT for airing the item.

Neither VRT nor the trip organizers were available for comment.