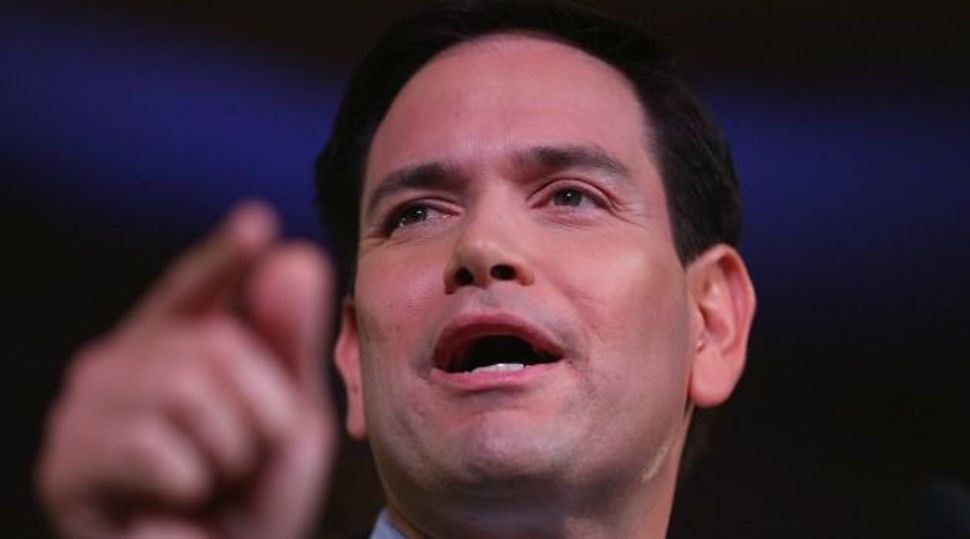 Sen. Marco Rubio of Florida, a candidate for the Republican nomination for president, said he would not pursue a two-state solution for the Israel-Palestinian conflict.

“I don’t think the conditions exist for that today,” Rubio said Wednesday during a question-and-answer session hosted by PBS’s Charlie Rose at the Council of Foreign Relations in New York. “That’s the ideal outcome, but the conditions for a two-state solution at this moment do not exist.”

“I think the most we can hope for in the short term is that the Palestinians Authority will be able to provide a level of stability in that territory. And ultimately, the conditions will rise up with new leadership that will allow something like that to happen,” he said, according to Haaretz.

Rubio said that that there was little difference between the view of the threat posed by Iran held by him and by Benjamin Netanyahu except that the Israeli prime minister “lives a lot closer to them than I do,” according to the New York Times.

He heavily criticized President Barack Obama’s foreign policy moves, and said that lifting sanctions on Iran under a proposed deal agreed to by the Islamic Republic and the world powers would lead to a “cascade of nuclear proliferation” that could force Israel to “take bold action” and foment a war in the region.

Earlier this month Rubio tried to amend Congressional legislation to require that Iran recognize Israel as a precondition to any nuclear deal.

During his speech Rubio asserted that: “Today, like never before, foreign policy is domestic policy.” Rubio is expected to with the support of Jewish billionaire casino mogul Sheldon Adelson in the 2016 presidential campaign.