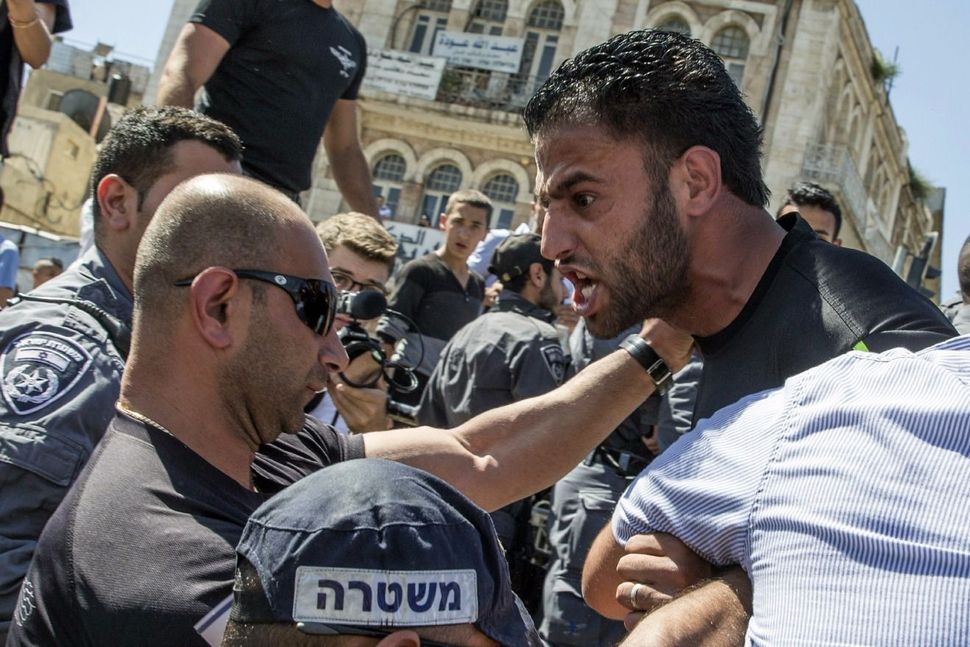 Mounted Israeli police clashed with dozens of rock-throwing Palestinians protesting on Sunday as Jewish nationalists commemorated Israel’s 1967 capture of East Jerusalem with a march through the old walled city.

Police said two officers protecting the thousands of Jewish marchers were injured by rocks and six Palestinians were arrested.

Reuters Television filmed police, some wielding batons, dragging several Palestinian men from the scene by their arms and legs during the clashes just outside the Damascus Gate leading into the crowded old city.

Police estimated more than 30,000 Israelis marched through old Jerusalem’s mostly Muslim quarter to the Western Wall, the last remnant of the Temple destroyed by the ancient Romans.

Police advised Muslim merchants to shutter their shops during the annual march on what Israel calls Jerusalem Day, the anniversary of its capture of East Jerusalem from Jordan.

Israel later annexed the area, making it a part of its capital in a move never recognized internationally. The war was in June, but Israel marks its anniversary according to the Jewish lunar calendar.

Next to the Western Wall, the march’s destination, stands the contested site known to Jews as the Temple Mount and to Muslims as Haram al-Sharif, which contains al-Aqsa Mosque, Islam’s third holiest site, and the Dome of the Rock shrine.

Israeli ultranationalists have been pressing for prayer rights there, which has heightened tensions with Palestinians.

The old city is also home to Christian holy sites such as the Church of the Holy Sepulcher, on the site where Christian tradition says Jesus was crucified, buried and resurrected.

Palestinians, who account for more than 30 percent of the city’s overall population, want East Jerusalem to be capital of the state they seek to establish in the West Bank and Gaza, also land that Israel captured in the 1967 war.

The Jerusalem march went ahead after the Israeli Supreme Court rejected a civil rights group’s petition to ban the march through mostly Palestinian areas of the old city to avoid violence.

Justices said they found police had taken measures to enforce the law at the site.