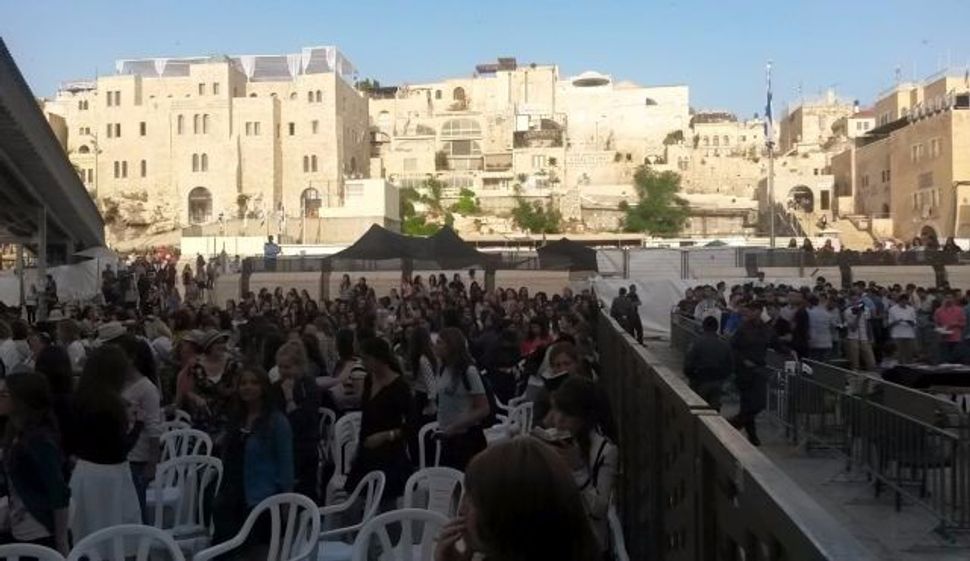 A male supporter of Women of the Wall was arrested after trying to pass a Torah scroll to the women’s section of the Western Wall during prayers for the new Jewish month.

The partitions separating the men’s and women’s sections were locked together and metal barriers placed alongside them on Tuesday morning to prevent the women from receiving a Torah scroll from the men’s side.

Activist Nitai Groen was detained by police after trying to pass a Torah scroll over the partitions, called a mechitzah in Hebrew, and over the barriers, according to Women of the Wall. He was later released.

Despite being unable to pray using a Torah, the group celebrated the bat mitzvahs of six 12-year-old girls, who had been prepared to chant from the scroll.

Regulations at the site set by the office of the Rabbi of the Western Wall and the Holy Sites of Israel, headed by Rabbi Shmuel Rabinovitch, have prevented women from using a Torah scroll in their section.

“Just a day after the city celebrated the historical liberation of the Western Wall, Jewish people in Israel and around the world were once more reminded that the holy site is still not a place they can freely pray according to their tradition,” read a statement issued by the group. “The Western Wall has been hijacked from being a national site welcoming Jews of all denominations to becoming run by an ultra-Orthodox minority, with regulations discriminating against women at the site.”

Last month, the women chanted from a full-size Torah kept in the men’s section, which was passed to them by moving apart segments of the mechitzah. Haredi Orthodox men praying at the Wall physically attacked the men who helped the women with what the group described in a statement as their “carefully planned help” to obtain the scroll, and then broke through the mechitzah barrier and attempted to take the scroll away from the women.

An April 2013 Supreme Court ruling acknowledged women’s right to pray at the Western Wall according to their beliefs, claiming it does not violate what has come to be known as “local custom.”

A post on the group’s Facebook page posted shortly after the end of the service said: “‘Sheriff Rabinowitz’ (sic) won his battle today against the six lovely Bnot Mitzvah. After a year of preparation and excitement, they could not read from a Torah Scroll at the Western Wall. With police barricades and locks, he has locked the Torah out of women’s reach. But he will not win the war. We say today loud and clear: we demand Torah for women at the Kotel. Rabbi Rabinowitz, LET MY TORAH GO!”

Women of the Wall gather at the Western Wall at the start of each Jewish month for the morning prayer service.

The group’s members have clashed frequently with staff from Rabinovitch’s office and with police for holding services that violate the rules enforced by that office, including singing, wearing prayer shawls and other customs that are forbidden to women under the office’s interpretation of Orthodox Jewish law.