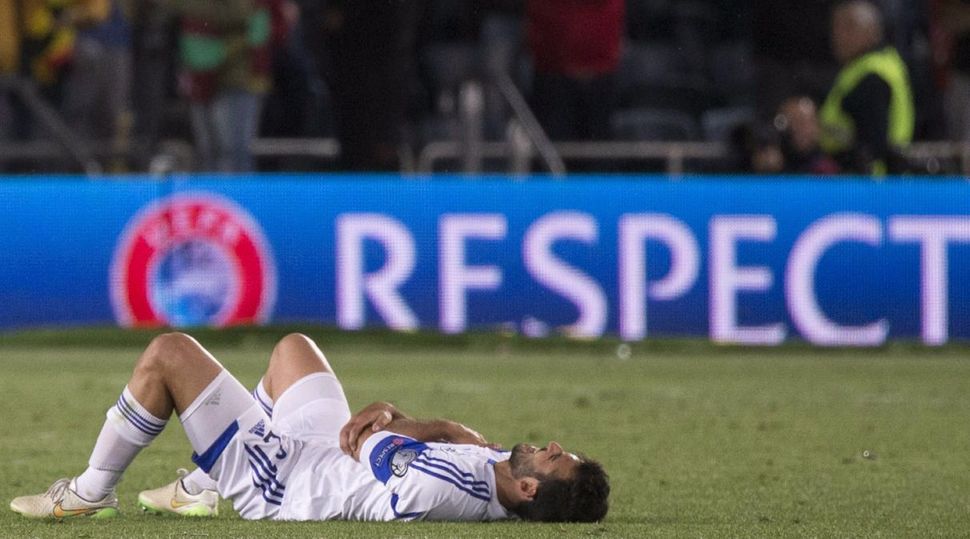 On top of land, settlements, resources and borders, Israel and the Palestinians can add another dispute to their long history of conflict – soccer.

In 10 days’ time, at the request of the Palestine Football Association, FIFA will hold a vote among its 209 members at a Congress in Geneva on whether Israel should be suspended from the world football body for violating rules relating to racism, the free movement of players and where clubs are based.

If Israel were to be suspended, its clubs and teams would not be able to take part in international competitions such as the Champions League and the Euro 2016 competition.

While Palestinian officials emphasize that there is nothing political about their move, it raises parallels with FIFA’s suspension of apartheid South Africa in the 1960s and Slobodan Milosevic’s Yugoslavia in the 1990s, making it a highly emotive issue with ramifications that go far beyond sports.

The Palestinians have raised three major complaints: that Palestinian players and officials are routinely restricted in their movement, making it difficult to play matches; that five clubs play in the Israeli league that are located in settlements in the Palestinian territories; and that the Israeli Football Association (IFA) is turning a blind eye to racism.

The complaints are long-standing, with the PFA having put them on the agenda at FIFA meetings in both 2013 and 2014. In the past, last-minute compromises have been found to prevent the Palestinians pushing the issue as far as a vote.

But this time the Palestinians are determined to go all the way, saying Israel has been hoodwinking FIFA for the past three years and done nothing to change its behavior. Israel’s federation says it has been doing everything it can.

“We will never, ever accept any compromise, any agreement or deal outside the Congress,” Jibril Rajoub, a former politician who has headed the PFA since 2008, said on Tuesday.

“(The Israelis) think they can keep leading the world by the nose because of the Holocaust,” he said, emphasizing the point twice. “They are the bully of the neighborhood.”

FIFA President Sepp Blatter arrived in the region on Tuesday and met Israeli Prime Minister Benjamin Netanyahu in Jerusalem to try to find a compromise solution. He declined to reveal details of the meeting but said he was “optimistic.”

In welcoming remarks, Netanyahu praised Blatter for keeping politics out of sport.

“Sport is a vehicle of goodwill among nations. The thing that could destroy the Football Association is politicizing it. You politicize it once with Israel, then you politicize it for everyone, and it will cause the deterioration of a great institution,” Netanyahu said.

At a later news conference, Blatter said he had proposed that FIFA organize a “peace match” between the Israeli and Palestinian national teams in Zurich. He said Netanyahu had promised to attend the event if it went ahead.

FIFA President Sepp Blatter has spoken to Rajoub and the chairman of the Israel Football Association, Ofer Eini, and is visting the region this week in the hope of finding a solution before May 29.

The Israeli federation has said it cannot be held responsible for restrictions imposed by the state of Israel, which frequently limits Palestinians’ movement or holds up the delivery of goods because of security concerns.

That position was reiterated by Rotem Kamer, the chief executive of the IFA, in a conference call on Tuesday, as both sides stepped up their public relations ahead of the Congress.

“I don’t think there is any football association around the world which can tell its government how to deal with security issues, including the Israeli Football Association,” he said.

“At the end of the day, it is not something that we can deal with,” he added, while also dismissing the charge about racism in Israeli football, saying it was an unfortunate phenomenon around the world that everyone had to fight against.

Palestinian officials have said quietly that they think the area where they have the strongest case is when it comes to teams from settlements playing in the Israeli league.

“If the other side insists on causing us suffering, we are not using violence or weapons, we are using the legal leverage of the FIFA statutes,” said Rajoub. “This is nothing to do with politics, this is a sport issue.”

If it does end up in a vote in Geneva, it is far from clear how it would turn out. And there’s also a dispute over what the threshold of the vote would be, whether 75 percent of members present or 50 percent plus one.

The Palestinians are confident they have widespread support. Gonzalo Boye, a lawyer advising them, said the motion to suspend Israel required the support of 50 percent of FIFA members who are present plus one vote, with abstentions not counting.

The Israelis take a different view, saying they have received a “clear interpretation” from FIFA that the proposal will need a 75 percent majority to pass, meaning the Palestinians will need about 160 votes, a tall order.

FIFA’s statutes say under article 14 that suspension requires a 75 percent majority. But the Palestinians argue that their proposal is being put forward as an ordinary agenda item, which has a lower threshold.

If Israel is suspended it would represent a major victory for the Palestinians as they prepare to take on Israel in other forums, such as the International Criminal Court, adding a political dimension beyond a sporting dispute. —Reuters