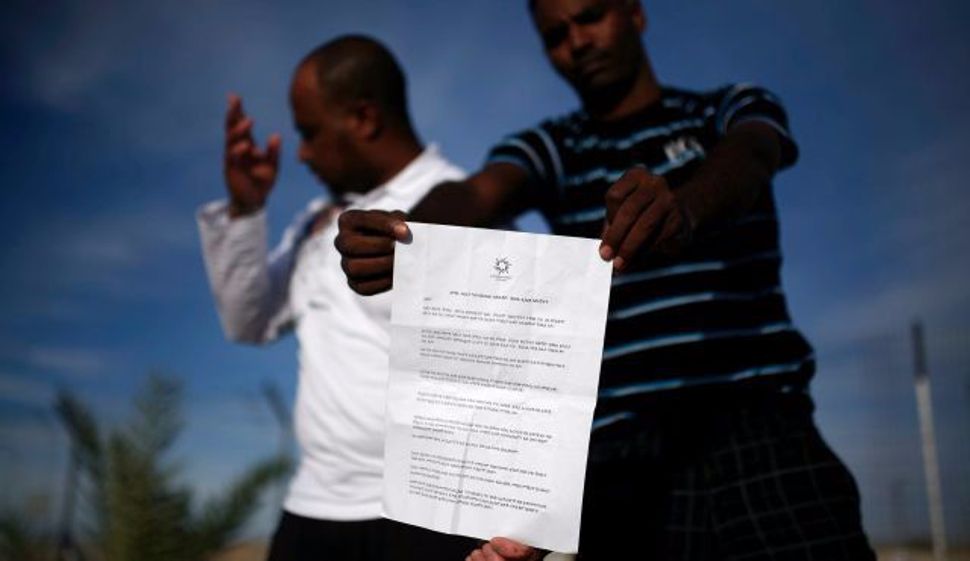 More than 40 rabbis from all streams of Judaism will hold a prayer vigil and pre-Shavuot study session at the Holot detention center for African immigrants.

The program, organized by leaders in Rabbis for Human Rights, and supported by the New Israel Fund, was scheduled for Wednesday outside the open-detention facility in the Negev Desert.

The event was scheduled, according to organizers, “to mark Shavuot, our turning point from freed slaves to a nation in covenant with God, by demanding that Israel honor our most commanded mitzvah,” citing Leviticus 19:33-34 which calls on Jews to love the stranger.

The date also was chosen because 12 of the detainees are facing immediate deportation, according to Haaretz.

”God repeated the commandment to protect the stranger at least thirty-six times because it’s a really hard thing to do. Now that we are in our own land, it is something that takes real faith in God, and embracing discomfort — in a way that keeping kosher or Shabbat does not. But it is the real test of the Jewish soul. In that way, the refugees hold up a mirror to our inner character. And they give us an opportunity to rise to our highest selves,” the organizers wrote in promoting the event.

Some 42,000 Eritrean and Sudanese citizens are living in Israel, with 2,000 in the Holot detention facility, where residents are required to check in twice a day. Many have made their home in south Tel Aviv.

Over 9,000 African migrants have left Israel in the last two years in voluntary departures, according to Haaretz. The Israeli government provided them with airplane tickets and grants.